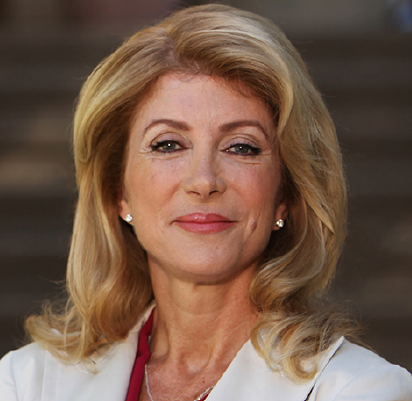 Wendy Davis is running for Governor because she loves Texas — not just for how good it is, but for how great it can be. The opportunities that Texas made available to Wendy — quality public education, a strong community college system, college loan and grant programs for deserving students — are what made the difference in her life. Wendy knows that every Texan deserves those same opportunities to do better. She’ll fight every day to ensure that Texas remains a state where hard work and determination are rewarded and everyone has a chance to succeed. Like any true Texan, Wendy Davis has taken on her share of tough fights. Raised by a single mother, Wendy began working after school at age 14 to help support her mom and three siblings. By 19, she was on her way to becoming a single mother, working two jobs just to make ends meet.

Knowing that education was the only path to creating a better life for her young daughter, Wendy enrolled at Tarrant County Community College. After two years, she transferred to Texas Christian University. With the help of academic scholarships, student loans, and state and federal grants, Wendy became the first person in her family to earn a bachelor’s degree, graduated first in her class, and went on to Harvard Law School.

After graduating with honors from Harvard Law, Wendy helped grow a successful business in Fort Worth and served nine years on the Fort Worth City Council, where she was recognized as a leader on economic development  issues. As chair of the City’s Economic Development Committee, Wendy helped create numerous public- private partnerships and successfully helped bring thousands of new jobs to Tarrant County.

Wendy was elected to the Texas Senate in 2008, defeating a longtime incumbent in a race widely considered one of the biggest upsets in Texas politics in recent years. In 2011, Senator Davis stood up and filibustered a budget that slashed over $5 billion from our public schools. And Wendy’s leadership in the legislature was instrumental in getting a majority of that funding restored to the budget in 2013.

Wendy believes our children deserve access to a world- class education. She believes that improving Texas education can create jobs and keep Texas on top. She continues to work on improving public schools by reducing the number of standardized tests given to students and negotiating the first cost-of-living increase for retired teachers in more than a decade.

Wendy Davis has also pushed for and supported policies that would create jobs for our service men and women upon their re-entry into civilian life and make sure that veterans, service members, and their families are provided every opportunity for a quality education. Wendy has helped pass important accountability measures to ensure taxpayer dollars meant to help Texas businesses are spent in the manner in which they  were intended — to create jobs and boost economic development efforts across the state of Texas.

Fighting for Victims of Sexual Assault

As a state senator, Davis wrote the law to ensure more DNA testing of rape kits, addressing the backlog of 20,000 untested kits, which has led police to find rapists and put them behind bars.

As a state senator, Davis led the fight against funding cuts to schools. She also believes kids need to prepare for the future, not just the next test. That’s why Wendy led the fight to reduce the number of standardized tests students are forced to take, from 15 to 5.

As Governor, she’ll stop the cuts to our schools, invest in our classrooms, support our teachers, and expand career programs so every student is better prepared for college or the workforce.

An Economy For All Texans

Wendy Davis wants to build an economy that works for all hardworking Texans – not just some:

As Governor, Davis will work to create more good- paying jobs for Texans. She will make sure we build upon the strong Texas of today to be an economic leader of tomorrow.

Wendy Davis brought a new vision to making Fort Worth a first-class city, working to turn the city into one of the top-ranked places in America to work, live, and do business. On the City Council, Davis was recognized as an economic leader who worked with the business community to recruit a number of major businesses to bring jobs to the city.

Wendy Davis knows that hardworking Texas families are the key to our economic success:

Women in Texas earn on average $8,000 less than men a year. Wendy Davis helped to pass the Texas Equal Pay Act through the Senate to help ensure women get paid the same as men for the same work.

As Governor, she will sign the Texas Equal Pay Act to help close the pay gap and ensure that women and all Texans are paid equally for doing the same work.

Wendy Davis will be a leader on energy issues for Texas’ future:

On the Fort Worth City Council, Wendy Davis was a visionary on energy issues and has a record that proves she would be a leader when it comes to oil and natural gas across Texas. Davis’s work helped produce hundreds of millions of dollars for the city and for individual homeowners, created jobs, and helped fuel the gas boom across Texas.

As Governor, Wendy will help our energy industry to remain a leader in innovation and technological advancement. She will protect private property rights and quality of life for Texas residents as the energy industry continues to grow and thrive.