Someone once asked Justice Ruth Bader Ginsberg when she thought there would be enough women serving on the Supreme Court. She answered “When there are nine.”  That’s how I look at Collin County – when every partisan office is held by a Democrat I’ll say there are enough.

Now that we’ve had a few weeks to emotionally absorb the results of the November 6 election, let’s look at where we are on that path toward having enough.

But first, let’s look at how we got here so that we can fully understand where we are and where we’re likely headed.

The Republicans should have had an easy win in 2016. The predominant historical pattern over the past 70 years has been for the White House to flip to the other party after a party holds it for eight years. But the public seems to have almost had its fill of over 35 years of conservative Republicans dominating the political dialogue. The Republicans had a weak field of Presidential candidates in 2016, and Trump only won the nomination because he bullied the rest of them and said out loud what Republicans have been saying in code words for fifty years. If it hadn’t been for Clinton running a weak campaign in the northern Midwest, the timing of Comey’s second letter, and Russian meddling, she would have won. This resulted in Trump starting out as one of the most unpopular Presidents in recent history and he hasn’t significantly improved his standing. In addition, with the electorate shifting away from Republicans at a fundamental level, Republican standing was further eroded by a trollish President. Add to that the usual pattern that the President’s party loses seats in his or her first midterm and the table was set for a big Democratic win.

Nationally this resulted in flipping Congress, with Democrats gaining at least forty seats. If it weren’t for gerrymandering they probably would have won closer to the 63 seats that the Republicans took in the “tea party” wave of 2010, Obama’s first midterm. Democrats also gained seven Governorships and took back 300 of the 900 state legislative seats that they had lost since 2010.

How this played out in Texas is illustrated in the following two charts.

Beto came within 2.7% of winning. But it wasn’t just him. The races for Lt. Governor, Attorney General, and Agriculture Commissioner were all within 5%, aided by incumbents with high negatives as well as the overall trend toward Democrats. 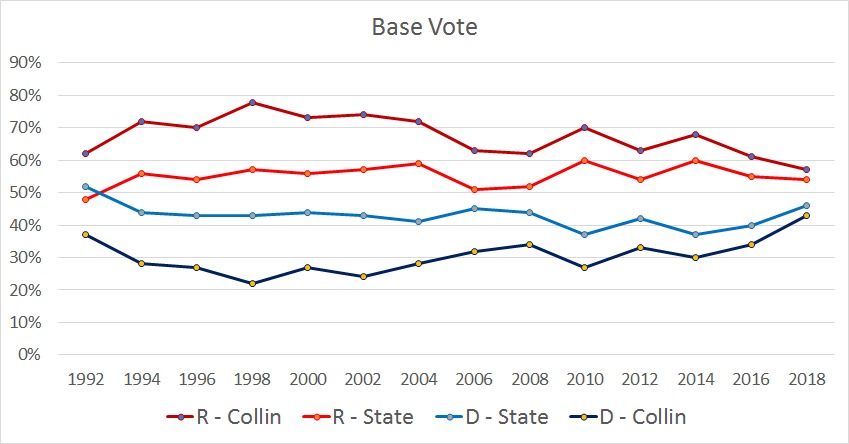 This graphic shows an approximation of the base vote for each party. It’s calculated by picking a statewide race in which both candidates have almost no name recognition, very little money, and don’t run much of a campaign. In most years it’s a state Supreme Court Justice of a Court of Criminal Appeals.  What’s most significant about this is that the Democratic base vote in Collin County increased by ten percentage points from 2016 to 2018, which is almost unheard of.  And while Texas is trending blue, we’re still trending blue faster than the state as a whole.

Our two wins that broke the Republican monopoly on partisan office in the county were Colin Allred’s win for the 32nd Congressional District, and winning eight seats on the 5th Court of Appeals.  We’ve been trying to put at least one Democrat on that six-county court for at least fifteen years, and flipping it to an 8 to 5 Democratic majority was a huge win. 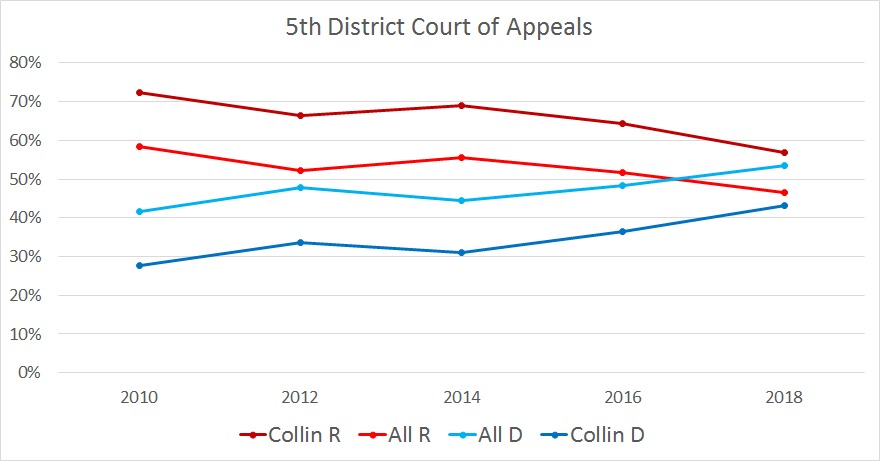 In running down the list of the rest of the higher profile and close races (and focusing on seats where we have run a Democrat in past years), across the board we improved our performance. (Please note that in years when no Democrat ran the line is at zero, but the Republican may not have been at 100% due to a Libertarian running and not shown on the chart.) 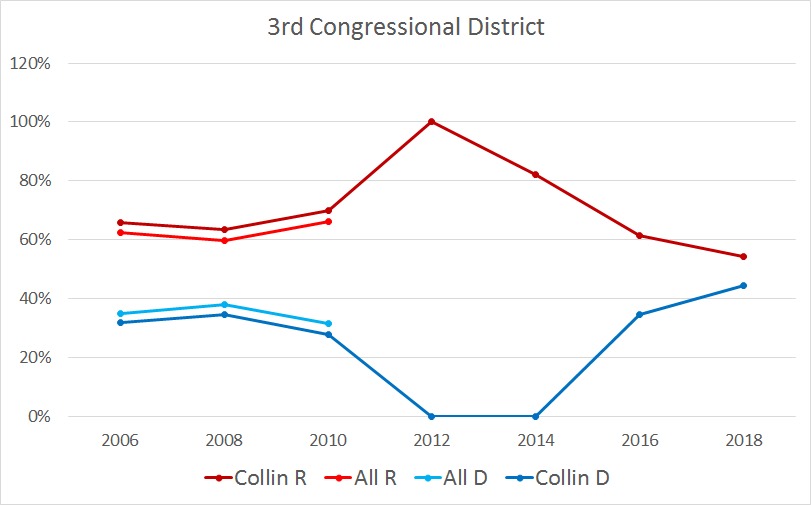 This district includes most of Collin County except for the far northern and eastern edges, and the area around Wylie and Sachse. Up through 2010 the 3rd District included a small part of Dallas County, so that’s why there are two pairs of lines. Lorie Burch ran a very strong field campaign but Van Taylor had the “R” brand and spent money on TV ads. 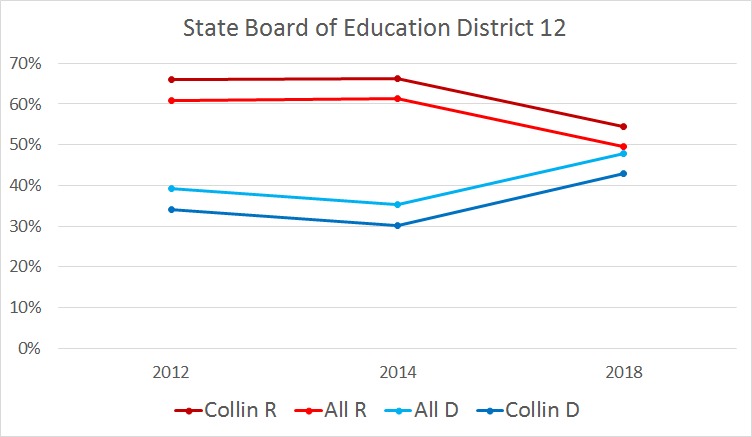 State Board of Education District, Years 2012 through 2018

The State Board of Education is a somewhat low profile race, but very important. District 12 takes in all of Collin County and a portion of eastern Dallas County. Suzanne Smith ran a strong campaign but couldn’t quite overcome Republican partisanship. 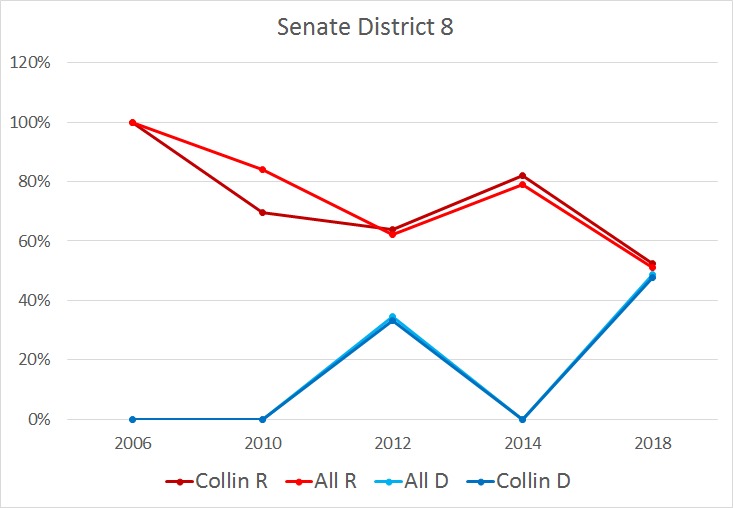 Mark Phariss ran a very strong campaign in this district that includes most of Collin County and the Richardson and far north Dallas parts of Dallas County. The terms are normally four years but due to redistricting after the 2010 census this seat was also up in 2012.  Mark handily beat Jack Ternan’s showing of 2012. 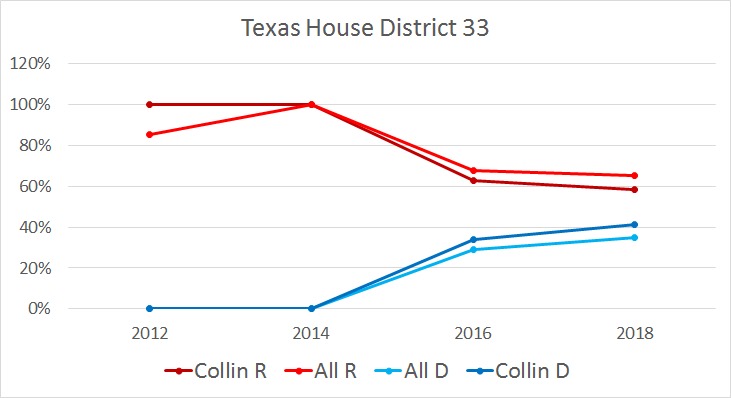 Laura Gunn did better in Collin County (Frisco and the far northern and eastern edges of the county) than she did in Rockwall County, showing that we’re bluer than some of our neighbors. 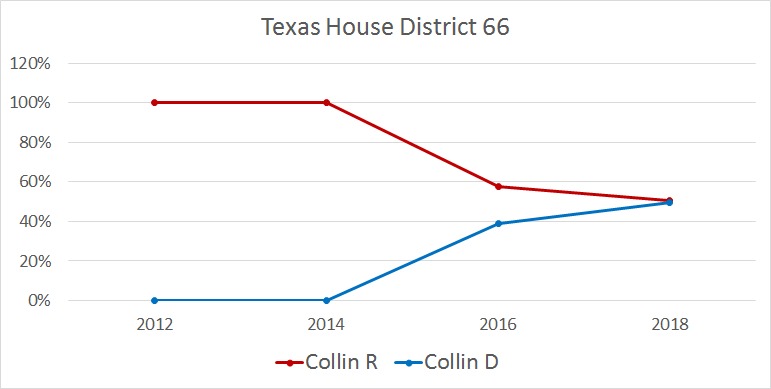 Sharon Hirsch’s loss of 391 out of over 68,000 votes in this west Plano and far north Dallas district was the biggest heartbreaker of this election. We hope she runs again in 2020. 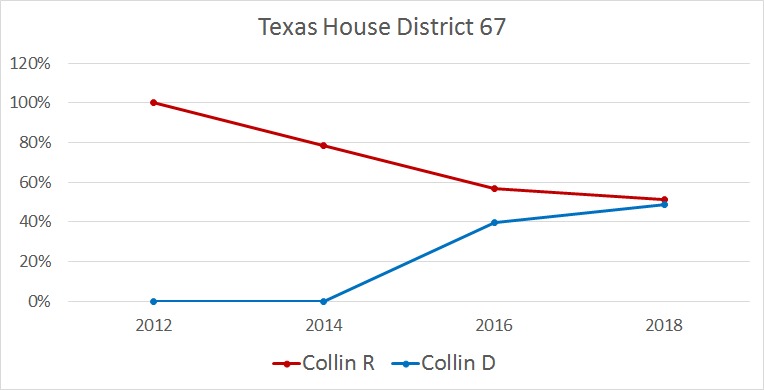 Sarah Depew didn’t do quite as well in this east Plano and far north Richardson district than Sharon did in hers, but close enough to make this seat competitive for 2020. 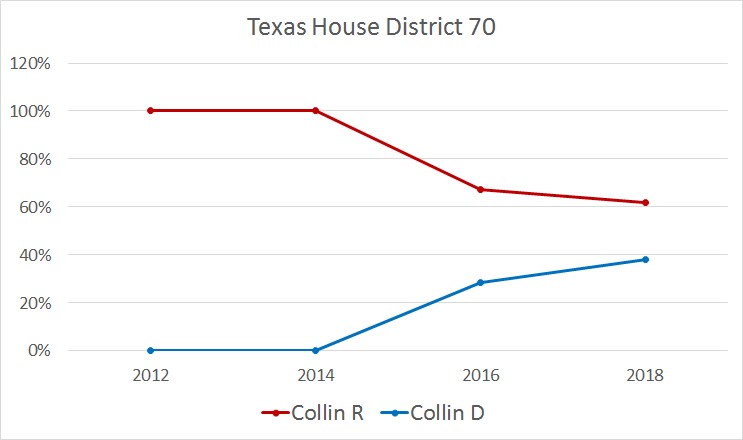 Julie Luton had a tougher district in McKinney and surrounding areas, but ran a great campaign and the results show promise. 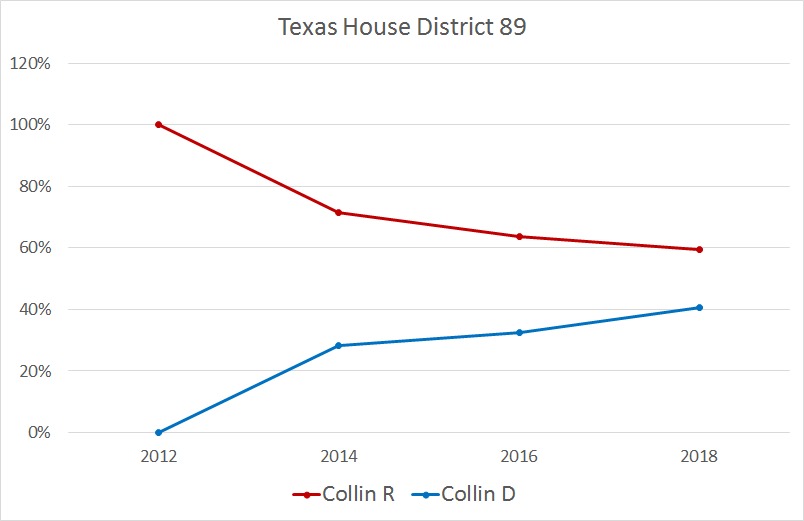 This marks the third election in a row where we’ve had a candidate run in this district in the southeast part of the county, encompassing far east Plano, Wylie, Sachse, and surrounding areas. Ray Ash finally brought it in over 40%. 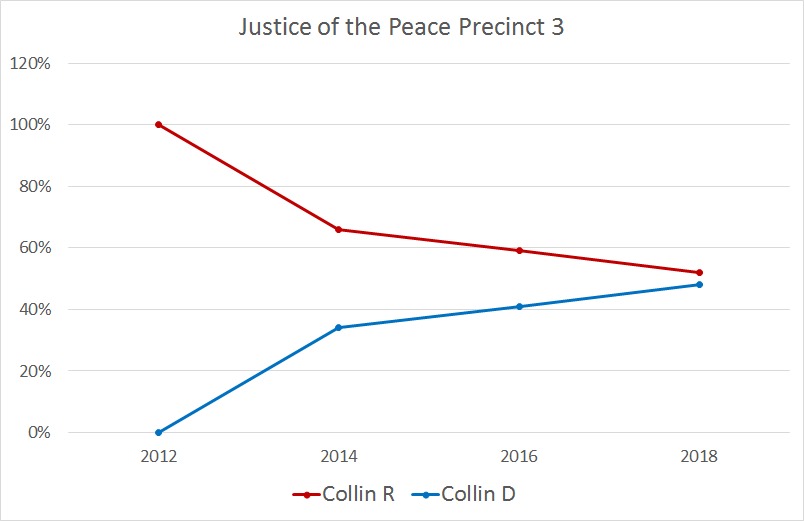 Justice of the Peace Precinct 3 voting percentages, Year 2012 through 2018

This also marks the third election in a row where we’ve had a candidate run in this very large Justice of the Peace Precinct in the southeast and far south central part of the county. There are two JP places with staggered terms in this Precinct, so there’s a race on the ballot every two years instead of every four. Ramona Brumfield was our best performing candidate in 2016 at 40.5%, and we’re disappointed she didn’t quite make it all the way to 50%.

We’ll be studying the precinct by precinct results a lot more in coming months to get a better understanding of our performance aside from the national trends. But for now, a few factors stand out.

Our turnout in the county was just over 61% of registered voters, which is almost a Presidential year turnout. Comparing this to our turnout of 36% in 2014 and 37% in 2010 this is a huge increase – over and above the increases in many other areas.  In addition to higher Democratic enthusiasm we can probably thank two high profile open seats – the 3rd Congressional District and State Senate District 8.  We also had many more strong campaigns than in previous years, and as we’ve said before the most Democrats on the ballot in thirty years.

Another factor was probably crossovers and party switchers. We saw this a bit in 2016 when Trump received fewer votes than most other Republicans in the county, with usual Republican voters crossing over to vote for Clinton or the Libertarian. From analysis of who voted during early voting and down ballot performance it appears that a significant number of these voters decided this year that they couldn’t vote for any Republican.

Predicting the future in politics is always a hazardous exercise. I know because I’ve made my own share of wrong predictions. And it’s still even more hazardous than usual with the unpredictability of the Trump effect. But this year gave us a good base line and it is fairly safe to comment on how the fundamentals are changing and what that probably means for future elections in the absence of unforeseen external influences.

In the post 2016 analysis everyone seemed to be preoccupied with white working-class voters. That’s not us in Collin County. We’re predominantly more suburban, college educated, upper middle-class voters. There was a bit of discussion about Trump losing many of those voters in 2016, and the country seems to have caught up with us this year in focusing on that group of voters. As the Republican Party increasingly becomes identified as the Trump Party we can expect these voters to continue trending away from Republicans and toward Democrats.

While this year’s ten percentage point bump in our base vote is an exception, we have been trending an average of about two percentage points per election cycle back to the mid 90’s. Add to that about a typical two percentage point boost for Democrats during a Presidential year over a midterm, and our base vote county-wide in 2020 might be around 47%. That makes any county wide race with a strong campaign very winnable in conventional terms.   That also means that the close races we had this year in HD66, HD67, and JP3 should be ours to lose in 2020.  We should be able to elect the County Tax Assessor/Collector with a good candidate, and perhaps even County Sheriff. All our Constables will be up for election and we should be able to win a couple of Constable Precincts as well. Finally, if there’s again a strong Trump effect with him being on the ticket, even races like CD-3, HD33, HD70, and HD89 may be competitive in conventional terms.

And as a final factor, for years people have been hesitant to give money, volunteer, or even vote because they didn’t believe a Democrat could win here. This year has proven how incorrect that belief is. As more people become convinced that we can win here our candidates will do that much better.

In closing, while we didn’t win most of the races we wanted we did much better than most credible observers expected. Collin County is definitely up for grabs in 2020, as is the entire state of Texas.  I hope you’ll join us through next year and into 2020 in building our base and the party so that we can take full advantage of the progress we made this year.