Collin County Commissioners voted today, August 4, 2014, to outline a County policy towards the support of unaccompanied migrant children, by supporting a resolution aimed at not allowing any county agency or county resources to be used, to house or provide support for undocumented immigrants who might come to the County, while they await INS processing. The controversial resolution was authored by County Commissioner Mark Reid, who was appointed to fill an unexpired term on the Court, by County Judge Keith Self, when Commissioner Mark Sheehan resigned to run for the Texas House of Representatives.

It is important to note, that Commissioner Reid’s resolution refers to migrant children as “foreign citizens entering the County illegally.”  The resolution is flawed because children entering the US from Central American states and other non-contiguous border countries are considered refugees from violence and oppressive regimes. The refugees are protected under a law signed by former President George Bush, until  there is a hearing by an INS administrative law judge.  Mr. Reid’s resolution presupposes migrant children crossing the border between Texas and Mexico are doing so illegally and that is simply not the case.

Commissioner Reid’s resolution appears to target  migrant children and migrant children alone- migrant children who could one day become an important part of the future of Collin County, if the child is determined to be here legally.  Mr. Reid’s resolution is nothing more than political grandstanding, in the most property rich county in Texas, a County that should be more welcoming to the migrant population, a County, that prior to today, has always been welcoming to anyone and everyone, regardless of their ethnicity, age, background, country of origin or any other distinguishing characteristic.

In supporting Commissioner Reid’s resolution, the County Commissioner’s Court has essentially closed the door on supporting immigration in Collin County. The message being sent to the business community, and the community at large, even churches and faith-based organizations, is that County government is more interested in sending a political-charged message to the federal government, than in doing the right thing, at the right time.

Good kids, immigrating kids, looking for an opportunity,  deserve much better than the message that was delivered to them today by the Collin County Commissioner’s Court.

We think the vote today, by the Collin County Commissioner’ was myopic and wrong and it sends out the wrong message. Today was a very sad day for the residents of Collin County who embrace family values and support the rule of law. Collin County leaders should embrace diversity, not policies that do the oppostite and are uncompassionate and unwelcoming. 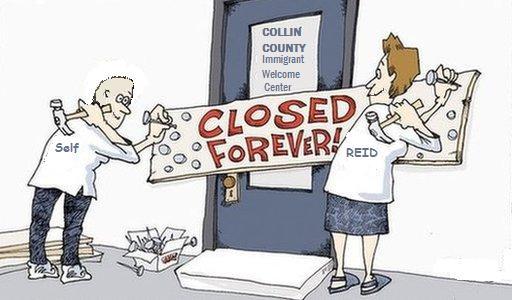