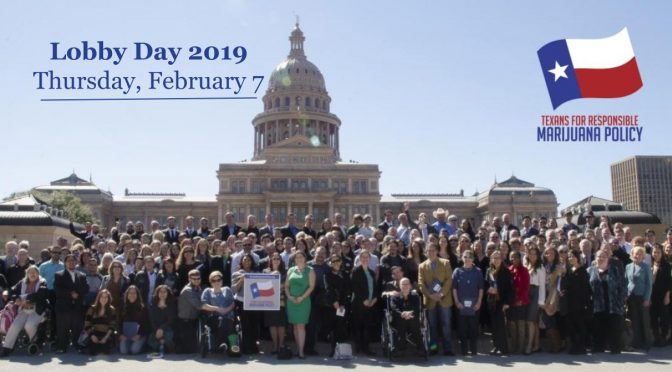 Are you interested in attending a Legislative Day in Austin for a Cause of Yours? Check out the TXLege2019 Corner in the Rally each week for information and details on upcoming legislative days.

The following article describes an advocacy day in the Capitol during the Texas Legislature on February 7, 2019. Lawmakers can begin debate and then vote on those bills starting on March 8. That’s the date all bills not deemed a legislative emergency by the governor can be heard.

Over 400 advocates from across the state visited the Capitol to visit with their legislators in support marijuana law reform! Groups pushing for an expansion of the state’s medical marijuana law joined people pushing decriminalization and total legalization efforts at the State Capitol on Thursday.  This Lobby Day is one example of the many advocacy groups that organize legislative days to Austin to visit their representatives and lobby for bills they want passed into law.

The event was covered by KVUE (video) and by Texas Public Radio (audio).

Heather Fazio, director of Texans for Responsible Marijuana Policy, said it has been a “banner year” for marijuana advocacy in Texas. They have had “27 marijuana-related bills introduced so far in Texas,” she said. “This is a record number of marijuana related bills.” More than two dozen marijuana related bills have been introduced for consideration by the 86th Texas Legislature, include proposals to decriminalize small amounts to expand medical access for patients.

Gov. Greg Abbott spoke in favor of signing legislation to decriminalize possession of small amounts of marijuana during the 2018 campaign season.