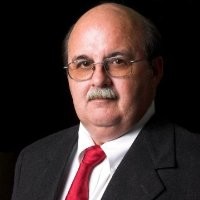 Friends, I am incredibly sad to report that we’ve lost a true leader in the Collin County Democratic Party and the progressive community in North Texas. Our dear friend, Bill Baumbach, died suddenly of natural causes (unrelated to COVID19) Wednesday night, 6/10/20, in Dallas.

An evening of remembrance is scheduled for Thursday, June 18th from 5 – 7 pm at Allen Family Funeral Options, 2112 W. Spring Creek Parkway, Unit E in Plano, 75023, next to the Spring Creek Church of Christ. Family and friends are welcome to come by to pay their respects and go as needed. Those who wish to share some remarks may do so. Please wear a mask and respect social distancing.

Beginning around 2002, Bill was an inspirational leader, an innovator in campaign strategy and technology, and the outspoken “conscience” of the local Democratic Party. He constantly challenged us to be better citizens and advocates for our constituents. He often spoke passionately at meetings and hearings and spent many long hours doing research, building databases and websites, and keeping all of us focused on the things that really mattered.

Holding public officials accountable was one of the things that were most important to Bill, so much so that he started writing a blog, The Collin County Observer, covering the activities of the county government, as well as local municipal governments. He did true investigative reporting, including interviews, in-depth research, and developing confidential sources, to uncover what had previously been known only to the “good ol’ boy network” and share it with his readers.

The Collin County Observer became very influential and was followed by elected officials, political activists, and many interested citizens. It was also an important source for major DFW and statewide media, and as a result, Bill became an official contributor to D Magazine’s FrontBurner blog. He was also one of the earliest members of the Dallas Morning News’ Community Voices opinion writers. Because of his perseverance, dedication, and crusading journalism, many positive changes occurred in North Texas.

One outcome of Bill’s work on The Collin County Observer is that he developed the in-depth knowledge and contacts to effectively run for County Commissioner against a 25-year Republican incumbent in 2006. He even received the Dallas Morning News endorsement, which was almost unheard of a Democrat at the time and won 38% of the vote.

This may not sound so impressive now, but this was the first time in decades local Republicans not only mounted a defensive campaign but were genuinely afraid of losing.  There were only a few contested local races that year, so the Collin County Republican Party poured all their considerable resources, and some from outside the county, into various strategies to keep Bill under 40%.

As a strong candidate who called out officeholders on things that would otherwise have gone unnoticed, even though he didn’t win, Bill influenced many positive changes in Collin County. For example, the County Commissioners refrained from voting for their usual generous raises and car allowances, eligibility for healthcare for those under the poverty level improved, and benefits for rank-and-file county employees were retained.

Through his writing and during his campaign, Bill earned the trust of many county employees, vendors and others who were key players in county and city government, and many of them continued to provide information that allowed him to shine a light on issues which benefitted county employees, taxpayers and residents.

Bill also inspired and recruited many others to run for office, serving as a mentor and consultant, and providing valuable advice and information that helped make their campaigns better.

Voting rights and election protection were also high on Bill’s priority list. He led many efforts to make voting more accessible, and ensure every vote was counted. As an IT and database professional, he was among the first to understand the vulnerabilities of touchscreen voting machines in 2003 and advocated for strict procedures to help maintain the integrity of each vote.

As a long-time Election Judge/ Central Count Judge/ Alternate Judge/ Asst. Primary Administrator and poll watcher, he was a leading voice on the practicalities of implementing Vote Centers and provided testimony to the Legislature on this and other election-related subjects.  Recently, he served as Central Count Judge for the 2020 Primary and was scheduled to serve in the same position in the Primary run-off in July.

Within the Collin County Democratic Party, Bill served as a Precinct Chair for most of the last 18 years, and on several committees. Most notably, he led the Tech Team for a number of years and pioneered the use of an extensive relational database (before VAN) that provided Precinct Chairs and campaigns detailed information about voters, volunteers, walk lists, phone lists and more. He was also the Webmaster for many years.

One significant project that Bill championed was the campaign to match Republican polling locations in the 2004 Primary. Previously, it was difficult for Democrats to figure out where to vote because we only had about half the number of polling locations that Republicans did. Bill insisted that “you shouldn’t have to go further to vote just because you’re a Democrat,” and drove the effort to recruit enough people to staff the new locations. Thanks to Bill’s carefully maintained database, and an intense effort by our team, we pulled it off. We’ve managed to maintain that standard ever since, but it wouldn’t have happened when it did without Bill’s determination.

As a member of the CCDP Executive Committee, he fiercely insisted on financial responsibility, intense focus on our long-term goal of electing Democrats, and strong ethical standards.  Bill was very skilled at retail politics and often used his influence, and his gift for impromptu speaking, to lead others to support his position, both at the local and statewide level. He was a delegate to the county and state conventions for many years and served as Delegation Chair for SD 30 several times.

He was a printer by trade, filling every position from press operator to management, but in a larger sense, Bill was truly a change manager. He helped bring many of his organizations into the digital age, and in that role became a specialist in a digital variable, or on-demand printing. as well as direct mail, databases, virtual storefronts, web programming, and customer relationship management software.

Bill is survived by his wife, Becky, his son, Grant, daughter-in-law Rosalyn, beloved grandson, Dylan, and Loki, the Irish Wolfhound who already misses their walks together.

Those who care to donate in Bill’s memory may wish to consider: