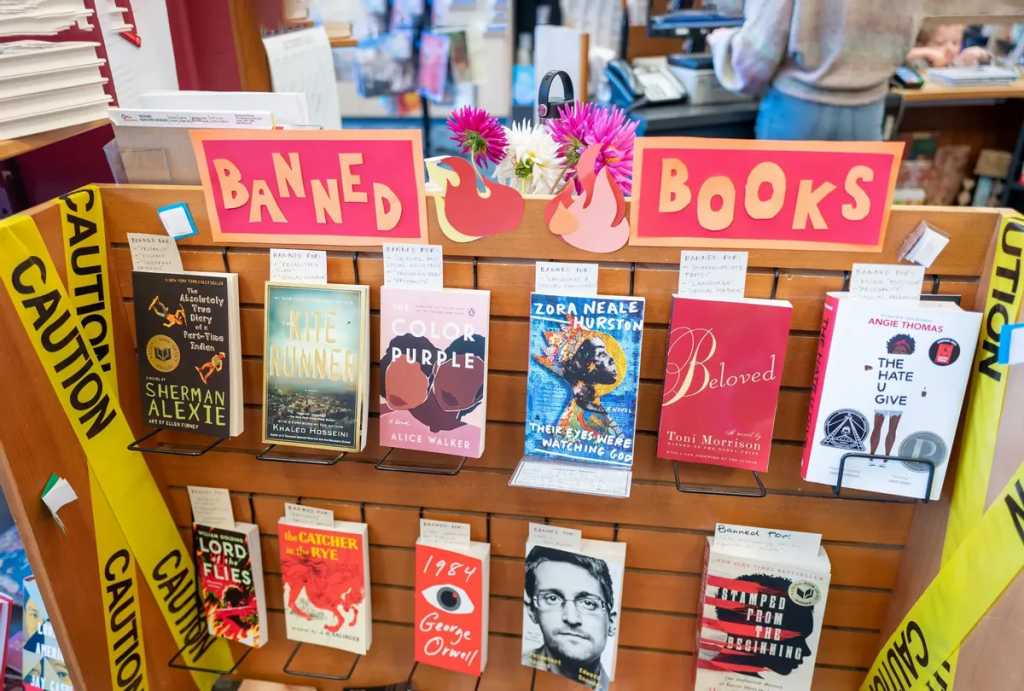 Texas Republicans, having worked up hysteria around so-called “critical race theory” being taught in schools (it’s not), have moved on to the next culture-wars issue: banning books from schools that they claim are pornographic or present history or society in ways that makes them feel uncomfortable. This is nothing new; Americans have been banning books since before there was a United States. But book bans must always be opposed by people who believe in freedom of speech and expression, and support public education.

I first read English author George Orwell’s 1984 in my public high school, probably in 1981. It absolutely terrified me. More than anything, the notion that an all-powerful State could not only control your actions but even your thoughts, to the point that rebellion was impossible, was terrifying to contemplate. Should I, as a high school student, been permitted to read it? It did make me very uncomfortable. Should 1984 therefore be banned?

Absolutely not. 1984 should be required reading for all high school students. And yet, since its publication by Orwell in 1949, it has been banned many times for social and political themes and for sexual content. It has also been challenged for being “pro-communism,” even though Orwell modeled his State and Big Brother on both fascist and Communist governments of his time.

Along with the typical complaints about “pornographic” books, this latest wave of conservatives banning books is remarkable for their anger towards books by and about people of color, or by and about LGBTQ, especially trans people. Texas State Rep. Matt Krause, a Republican, released a list of about 850 books that he wanted to ban from school libraries. He claimed the books “make students feel discomfort” because of their content about race and sexuality.  An analysis of Krause’s list by The Dallas Morning News found that of the first 100 titles listed, 97 were written by women, people of color or LGBTQ authors. A common complaint is that these books will make children think about changing themselves, or teaches them “critical race theory.”

School libraries aren’t the only place where “conservatives” are seeking to ban books. Some public libraries in cities and counties in Texas are seeing numerous book “challenges” from local residents, often with the stated goal of “trying to protect our children.” Late last year, Llano County Community Library was forced to shut down for several days to enable librarians to conduct a “thorough review” of every children’s book in the library, at the behest of the Llano County Commissioners Court. Local public libraries in Victoria, Irving and Tyler are facing “book challenges” from local residents seeking to have children’s books removed. And Granbury ISD, in Hood County, removed 125 books from the high school library after Rep. Krause spoke with Hood County Judge Ron Massingill.

Libraries, and especially school libraries, need to be places where students can go and find stories about people who look or feel like them. They need to be places where students can safely explore their world, which for many students is a baffling place full of change, new feelings, and sometimes danger. Our children are actually pretty resilient, and typically won’t read books that make them feel too uncomfortable or that present ideas that are too advanced for them.

But if the books that they need to find aren’t available, they will look elsewhere, potentially somewhere less safe than their school or community library. Are all books appropriate for all ages? No, of course not, but we need to trust our librarians to make those choices, not politicians with partisan goals in mind, like Republican Rep. Matt Krause and Hood County Judge Massengill. Parents always have the right to tell their children what not to read, but they do not have the right to decide what is appropriate for all children to read. That path indeed leads to the slippery slope in which more and more books are determined to be “inappropriate” and book bonfires come back into vogue. As a Granbury High School student memorably stated, in comments to the Granbury ISD Board of Trustees, “No government - and public school is an extension of government - has ever banned books, and banned information from its public, and been remembered in history as the good guys.”

Public education and free speech are under attack. Book banning, a favorite activity of fascists and Republicans, is making a comeback, and we have to fight back.

Show how much you support free speech and BOOKS by recording a short video of yourself showing us your favorite banned book and telling us why you love that book or reading a brief portion of the novel. Email your video clip to executivedirector@collindemocrats.org.