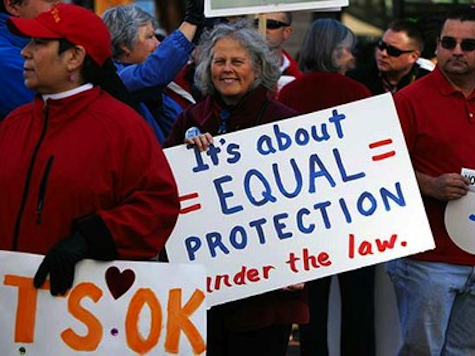 News reports coming out late last evening, indicate that sixty-three Texas Republicans have signed an amicus brief that claims legalizing same-sex marriage could lead to the government to sanctioning incest, pedophilia, and polygamy. Signatures on the brief submitted to the Fifth Circuit Court of Appeals include Texas House Speaker Pro Tempore Dennis Bonnen and GOP nominee for lieutenant governor, state senator Dan Patrick and State Senator Ken Paxton, from McKinney, who is the GOP Nominee for State Attorney General.

The brief states that the courts should take into account “that recognition of same-sex marriage ‘could lead to the recognition of bigamy, incest, pedophilia, and group marriage.’” The legislators filed the amicus brief on behalf of Texas Attorney General Greg Abbot’s appeal of U.S. District Judge Orlando Garcia’s ruling that the state’s same-sex marriage ban was unconstitutional.

Texas Democrats support the Supreme Court decision in United States v. Windsor, which found Section 3 of the federal Defense of Marriage Act unconstitutional. We call for the total repeal of DOMA and passage of the Respect For Marriage Act. Nineteen states and the District of Columbia recognize and have legalized same-sex marriages.

In February 2014, U.S. District Court Judge Orlando Garcia in De Leon v. Perry, ruled that Texas’ current prohibitions on same-sex marriage conflict with the U.S. Constitution, “[in] deny[ing] homosexual couples the right to marry, and in so doing, demean[ing] their dignity for no legitimate reason.” Texas Democrats call for the immediate repeal of the Texas Defense of Marriage Act and the Texas Constitutional Marriage Amendment and oppose other attempts to deny the freedom to marry to loving same-sex couples.

The claims made by the signers of the amicus brief, which claims legalizing same-sex marriage could lead to the government to sanctioning incest, pedophilia, and polygamy are ludicrous and not founded on any scientific or social principals of fact. We call on all common-sense people to repudiate these horrific and bigoted statements.

Let’s keep the government out of our bedrooms and let two people who love each, not be handicaped by any law that that deies two loving people the right to show a long term commitement to each other. Family values are important.