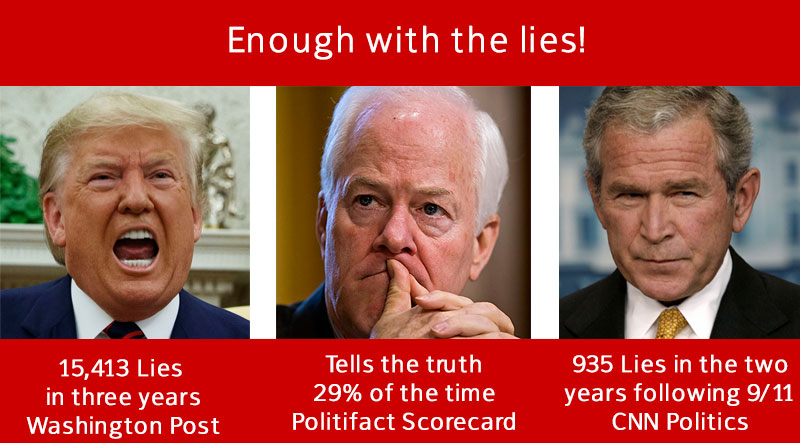 This editorial will begin a series that will show that all positions taken by the modern Republican party are based on lies.

The GOP has always been the most egregious about lying to the public. For example, President Reagan contended that cutting taxes would increase economic activity and allow tax revenue to go up, even though the tax rates were lower. This is the now infamous, ‘trickle-down’ theory in a nutshell. Of course, that never proved to be true.

That was followed by another big lie by President George W. Bush – Iraq has Weapons of Mass Destruction (WMD). That led to hundreds of thousands of dead, a trillion dollars spent, and a Middle East occupation that continues to this day. But no WMDs – the kind that make mushroom clouds as Bush claimed – were found. It was a lie.

However, President Trump has taken lying to a whole new level. His first claim was that his inaugural crowd size was bigger than President Obama’s. This has proven to be a pattern since the Washington Post has documented that President Trump has made 15,413 false or misleading claims since taking office.

So, it’s clearly time to start calling lies exactly what they are — lies. No more, ‘he misspoke.’ Or ‘he was mistaken.’ It was a lie. Let’s call it what it is.

Today, let’s discuss the GOP lies about Healthcare. Last week, President Trump claimed that he was protecting people with pre-existing conditions. This is such an obvious lie that the usually reserved Texas Democratic party released a blunt press release “Trump and Cornyn Continue to Lie About Protecting Pre-Existing Conditions” Way to go TDP!

The truth is that President Trump is backing a lawsuit to eliminate the pre-existing condition protections in the current Affordable Care Act (Obamacare). This lawsuit is led by our own Texas Attorney General, Ken Paxton.

But they’re being very clever about this. The GOP doesn’t want this lawsuit to get too much media attention. This way their lie about protecting pre-existing conditions can fool more people. So they are quietly asking the Supreme Court to delay review of the lawsuit until after the 2020 election.

Remember when the GOP ran on ‘Repeal and Replace?’ The truth is that the GOP had control of both houses of Congress from 2011-2018. The GOP had both Houses of Congress and the Presidency from 2017-2018. Yet they did absolutely nothing to make healthcare more affordable.

Let’s not get fooled again. The only way to make progress on healthcare is to vote blue no matter who in 2020.