Start the Independence Day celebration by walking with fellow Democrats in the Plano Lions Independence Parade.

Dress for the weather and expect a leisurely 2 mile walk.   Wear red, white, and blue — Especially blue!  Parade lineup begins at 6:30 a.m., while the parade itself begins at 9 a.m.  Look for Collin County Democrats.

The parade march begins at 9:00 a.m. on Friday, July 4th, 2014 with a parade. The parade will start in the parking lot of the Plano ISD administration building.

It will travel west on 15th Street then north on Independence. It will then head East on Parkhaven, ending in the parking lot of Plano Senior High School.

The Plano Symphony Orchestra, led by Maestro Hector Guzman, will present an entertaining and inspiring tribute to America at the Eisemann Center. Patriotic selections will honor our country and the people dedicated to preserving our freedom. Joining the Plano Symphony will be Plano’s Men of Note Chorus and the Patriotic Pops Chorus, composed of talented choral singers from the Plano Civic Chorus and other choral groups throughout the North Texas area.

Summer Concerts in the Park series continues with the “Star-Spangled Spectacular,” featuring vocalist Michele Todd. Nothing says summer like a swimming pool, outdoor barbeque or a concert in the park with the Plano Community Band. Pack your blankets and chairs, your kids and dogs, even your dinner and dessert for a star-spangled spectacular with patriotic music, an Armed Forces salute and a finale of “Stars and Stripes Forever.”

Wrap up the evening at 9:30 p.m. with the All-American Fourth Fireworks. Leave the fireworks to the professionals as you sit back and enjoy this colorful display. Plano’s sky lights up, so bring a blanket and enjoy the free show. Picnic baskets are welcome, or purchase items from the vendors on site. Parking will be available at Collin College, First United Methodist Church Plano and Plano Centre. Listen to the music synchronized with the fireworks on KLAK 97.5 FM. 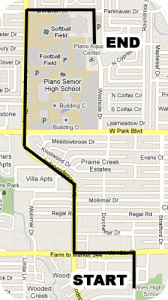