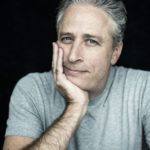 Do I think Jon Stewart is to blame for Donald Trump’s successful presidential campaign? Yes, I do. But not for the reasons that you may think. Like so many Daily Show fans, I felt the emptiness left by his vacancy and wished for his insightful deconstruction of the disaster unfolding in front of our eyes. But that is not what I’m talking about when I reference blame.

Let me start at the beginning. I vividly remember the black leather journal I purchased after the Supreme Court declared George W. Bush our next president. I promised myself that I would use that journal to track everything Bush would do to imperil our country. I vowed to watch every press conference, read proposed legislation and executive orders, and be educated enough about the issues that concerned me that I could illustrate the dangers to anyone who would listen. Then, it turned out, I didn’t need to do that. Jon Stewart did that. The Daily Show correspondents did that. And they did it better than I could have ever done with my journal. So, instead of journaling and speaking out, I watched The Daily Show and felt relieved that I was not the only one who felt that we were in trouble from Day One of Bush’s administration. And it worked. The Daily Show became the vehicle of critical thinking about the Bush administration, and inspired the rumblings of what would become the Obama coalition.

Then came the outrage against President Obama. Not mine, but the opposition party. Its immediate reaction was to discredit and oppose him at every turn. Luckily, Jon was there. Remember the Michael Steele puppet? When Steve Carell got on John McCain’s Straight Talk Express? Or when Samantha Bee went to the Republican National Convention? Remember how relieved we felt when the show would sum up the Tea Party town halls or interview some nonsensical local or state representative about his or her ludicrous policy? I do. I felt the collective cohesion at the water cooler the next day. We believed that the foolish assertion that Obama was not born in the U.S. would not stick – Jon showed us just how crazy that claim was. We believed the racist Tea Partiers would never last – Jon, like many of us, assumed that they were just a fringe group, and we all had a big laugh.

So, for 16 years, I did not journal; I watched The Daily Show. Sure, I spoke out, but mostly to those who shared my views and watched Jon too. I made sure to vote – but only in national elections and a few state elections when the governorship was at stake (even though that always felt like a waste of time in Texas). But mostly I owned a business, ran a household and went about my daily life.

Here’s the rub: Jon Stewart helped me become idle. And I don’t think I’m alone. The Daily Show seduced many of us into a complacency. Jon’s voice was so much stronger and louder than mine or my neighbor’s or my mother’s. It led me to a false sense of security that it would all work out, and I could just let others worry about the business of civics.

So, although I blame Jon Stewart; mostly I blame myself for becoming lazy, for relying on a comedian and a celebrity to speak for me, for thinking that his show would protect me and those people and values that I hold dear from the dangers of political corruption.

Now, instead of doing yoga, I am marching at protests and canvassing neighborhoods. Instead of coloring in my adult coloring books, I am decorating protest posters to carry at rallies. I have fewer Netflix nights since I have joined Indivisible Groups, organized a resistance group and initiated my plans for a podcast. I have cut my monthly entertainment budget so I can donate to the ACLU, Planned Parenthood and candidates who have stepped up to run in the important local elections.

The fault lies with you, Jon Stewart. Thank you; we’ll take it from here.

Anjanette Shake is the founder of Academic Solutions, a private educational consulting agency in Plano serving families in North Dallas for 20 years. She holds a Bachelor of Arts and a Master’s in Humanities. She and her husband raised three children in Plano. When not volunteering, she dabbles in fiction writing, painting, and gardening.