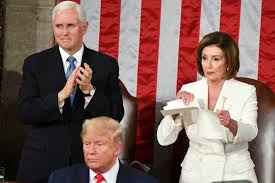 You followed the hearings in the House of Representatives.

You watched the House impeach the President.

You heard at least some of the arguments of the Impeachment Managers in the Senate trial.

And now, as expected, you have seen the Senate refuse to remove the President from office.

We are now facing the gravest internal threat to our democracy since the Civil War, and perhaps ever. If you think this is hyperbole, we respectfully suggest you take a few steps back and think again.

The Founders built a system of government that depended on checks and balances, and people acting in good faith within them. We now see those checks and balances broken by the factionalism that they feared, with elected officials acting in bad faith by putting loyalty to President and party over loyalty to the nation. This is the same path that NAZI Germany took, and all too similar to the transformation of the Roman Republic into the Roman Empire ruled by a dictatorial Caesar.

The arguments that the Republican Senators offered to justify their votes included “he didn’t do it, “he did nothing wrong” and “It was wrong, but not worthy of impeachment”. But the one that is most incongruous is “What he did was wrong, but it’s too close to the election. Let the voters decide”. If this sounds familiar, it should. It’s an echo of the Supreme Court’s ruling that said in effect, that partisan gerrymandering was wrong but it is up to the voters to fix it. Both situations fly in the face of logic – how can voters fix a problem if the very nature of the problem is impairing their ability to fix it? The Senate and the Court shirked their obvious Constitutional responsibilities and punted to “the voters”. It is truly up to us now, and with the President free and clear to do more meddling another set of obstacles just got thrown up.

And we see this corruption, this blatant lust for power, all the way from the White House down to our own County Courthouse where cronies on the Commissioner’s Court work to thwart the prosecution of our indicted Texas Attorney General, and by all evidence eliminated a Justice of the Peace Court because they were afraid that a Democrat would win it.

This is a year to make sacrifices – of time, money, and energy. Whatever your skills or abilities there are things that you can do for Democratic candidates and the party that supports them:

To find a local candidate campaign to help – https://www.collindemocrats.org/2020-candidates-for-the-democratic-party-primary/

But do something, and keep on doing it through November 3.

The weight of history, and the responsibility to preserve our nation’s values and traditions lie squarely on our shoulders. We may not think ourselves up to the challenge, but it’s always been true that we are called to rise to the times and seldom have the luxury to meet threats at our convenience.  Working together, we can prevail!