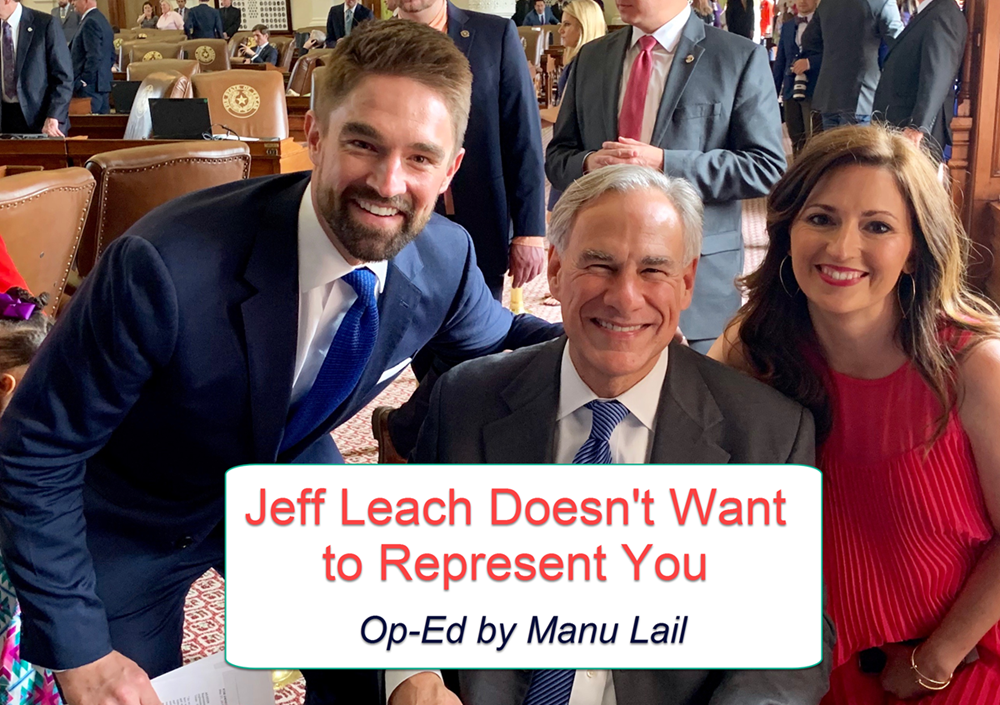 I had the honor of attending the NAACP Freedom Fund Scholarship Luncheon this past weekend. As I walked to the candidate table, I saw the usual Democratic candidates like Rocio Hernandez (HD67 candidate), Lorenzo Sanchez (HD67 Candidate), and Sean McCaffity (CD3 Candidate) among many others.

However, I also noticed Jeff Leach, the current Republican Representative for HD67 seated at the table. In typical fashion, I grabbed a seat next to him hoping to strike up a conversation to get more insight into his personality and political thinking.

By now, I’m sure most of you have heard about Jeff Leach and his allegiance to the Empower Texans. He’s the author of the constitutional amendment to stop us liberals from enacting a statewide income tax when nobody was calling for one.

He’s the “defender of education” even though the state of Texas ranks in the bottom half of the nation when it comes to public education. And he’s the “protector of life” as our state has some of the highest maternal and infant mortality death rates in the country. Yes, like some other Texas politicians, Jeff Leach seems to be all words and little action.

Like most people, my parents always drove home that honesty is the best policy. Be true to yourself and those around you.

When I decided to run for office, I made the decision to answer questions truthfully, admit mistakes when they occurred, and readily admit when I didn’t know something. In my mind, it’s easy to accept someone for being human, but difficult to accept when someone willfully turns a blind eye to the truth.

A part of politics is having honest discussions, most times about things you don’t necessarily want to talk about. I had been hoping to have a candid discussion with Jeff Leach for some time now.

Jeff and I shook hands with the usual, “It’s good to see you.” He sat quietly at our table and fidgeted with his phone. He was up next to speak on stage, so I’m sure much was on his mind. As the speaker on the stage announced his name, he got up and delivered a message about positivity, unity, and community.

After his speech, he promptly left the room.

The same thing tends to happen every time I’ve been in a room with Jeff Leach. While I understand that we all have busy lives as candidates, I do expect officeholders to meet with their constituents and converse with those who have differing opinions from their own viewpoints.

In my experience, it lends to a broader worldview and a better understanding of the challenges people face and the solutions to resolve those issues. Ask any candidate and they’ll tell you how humbling of an experience it is running for office because you meet so many people facing an array of challenges and issues.

We all know that this is the election of our lifetimes coming up in November 2020. Much will depend on how much work you put into registering new voters and getting them out to vote.

Remember, Jeff Leach doesn’t want to represent you, he wants to represent his base. So, let’s work the entire county, the whole room, and most importantly, let’s work to be true representatives of the people of Collin County.