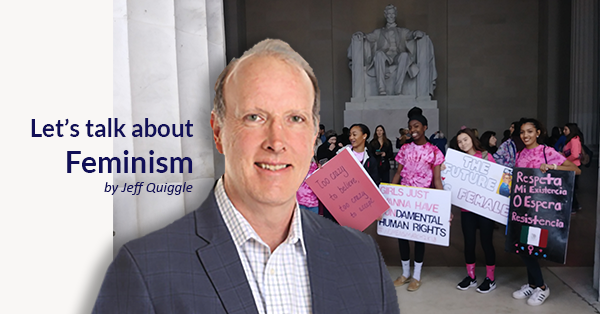 by Jeff Quiggle
I am a man and a feminist — and not just because feminism is important to a woman in my life.
I am a feminist — not because I have a mother, or a sister, or a wife, or a daughter, or women colleagues and friends — and I do have all of those. I am a feminist because I support full rights and equality for women. And that makes me a feminist.
For me, being a feminist is quite simple. One of my personal touchstones, a basis for my own personal activism, is the concept of personal freedom. Freedom is a foundation of our basic laws and of our society as a whole.
As a straight white male, I enjoy the freedoms guaranteed in our Constitution. But women, and especially women of color, do not experience the freedom that I and other white men take for granted. Women are not treated as equals to men, not under our laws, and not by our society as a whole. People who are not treated equally are not free. Feminism is important because it works to ensure women have the freedom that I and other men take for granted, and which is the birthright of all Americans.
For example, a woman who is not able to exert control over her body or is not able to control her reproduction is not free. Not only are states seeking to make abortions illegal, punished similarly to murder, but in some states, certain types of contraception are classified as “abortifacients,” and a movement to outlaw them just as if they are outlawing abortions seeks to put an end to this option. Some states, including my home state of Texas, are seeking to make women’s health providers such as Planned Parenthood ineligible for Medicaid. This effectively shuts these clinics down further endangering many of their patients who are poor or don’t have insurance, and therefore are reliant on Medicaid. Laws that restrict women’s access to healthcare or limit the medical procedures they can have do not treat women as equal to men, who face no such restrictions on medical care. These laws make women less free.
Another example: in the United States, women are on average paid somewhere between 78% and 94% of what men in similar jobs and with similar qualifications are paid. This is merely an average, and the actual pay gap varies by state, in some states significantly. Even though most states have enacted equal rights laws, these pay disparities persist, and are even worse for women of color. She will have to work longer hours to get to parity, which may not even be possible. And since women are more often than men caregivers for children or elderly relatives, being paid less than men is more of a problem for women. A woman who is paid less than a man is not equal, hence is less free.
Women are also made less free because they are more often the victim of domestic violence at the hands of a husband or boyfriend. Politicians, typically Republicans, have valued the rights of men to keep their guns over the safety of women by opposing “red flag” laws that enable law enforcement to confiscate guns from people who are subject to restraining orders. For example, a man who has previously assaulted a woman partner is able to return with a gun and murder her. When women fear for the lives or are murdered because of a violent partner with a gun, and our politicians’ refusal to pass laws that might protect them, women are less free.
Men who support personal freedom must advocate for women’s rights and equality for women. Otherwise they are helping to perpetuate the unequal status of women in our country. This is both patently unfair and dangerous to women. It is important, then, that men advocate for and support equal rights for women, and that means being a feminist.
In order to advocate for women’s rights and equality, men must first recognize the privilege that comes from being male in our society. Often we do not understand the discrimination and unequal treatment that women face because we are often unaware of it. We need to watch for unequal treatment and call it out when we see it. How else can men be feminist advocates?
To paraphrase Martin Luther King, Jr.,

“Inequality anywhere is a threat to equality everywhere.”

When women are treated unequally to men, they are not free to reach their potential. When women are free to achieve, all of our society benefits, not just women. Unless men are willing to stand for equality for all, we are not living up to the ideals of the basic laws that our nation was founded on. Freedom for some means some are not free. Women deserve the same freedom that men enjoy, and men must advocate for that. This is why I am proud to call myself a feminist.