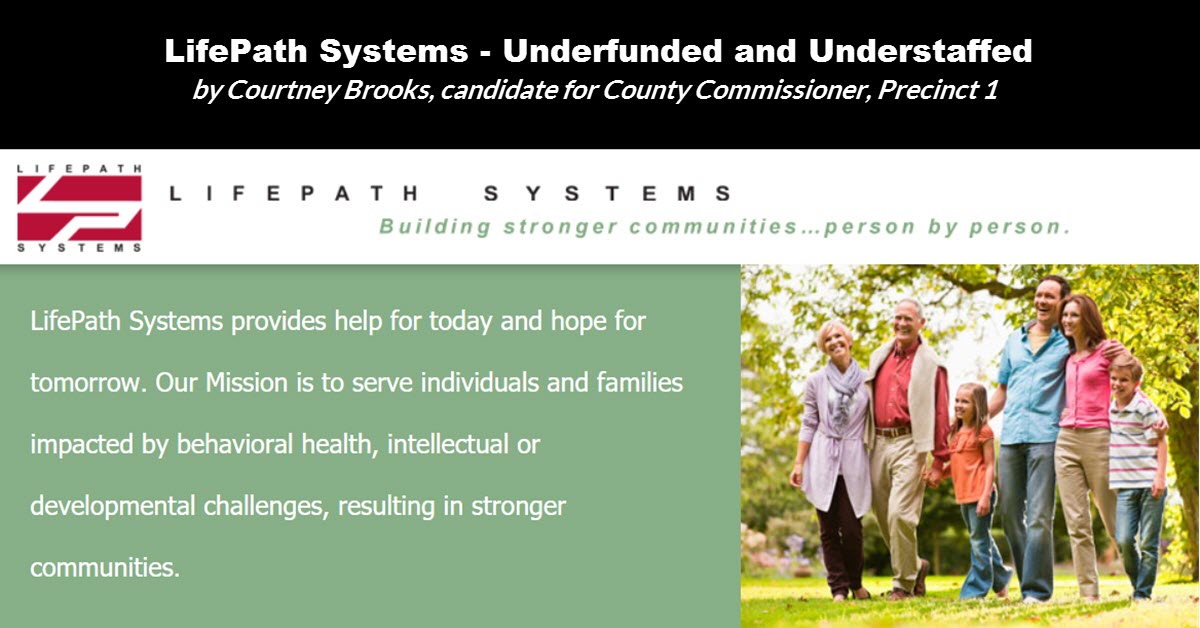 LifePath Systems in McKinney, TX is Collin County’s local authority for both mental health and substance abuse services. Individuals who qualify for state-funded assistance are able to get treatment based on available funding. In 1986, the Collin County Commissioner’s Court became the sponsoring agency for LifePath, providing funding to match what is given by the state of Texas.

LifePath does a wonderful and necessary job, but they are underfunded and understaffed which has caused them to be overwhelmed.

LifePath has an annual budget of $40 million, of which the state funds about $3 million to cover crisis care and indigent health. There is very little funding for substance abuse by the state. Collin County Commissioner’s Court covers $2.2 million to LifePath, of which $1.2 million goes towards mental health services and runs the operations at the crisis center.

There are 450 employees at LifePath, including:

LifePath has 220 new patients coming in each month, which comes to about seven new patients each day. There is a walk-in clinic Monday through Friday, that serves low-income, indigent clients, and those who can pay.

Each patient is immediately evaluated by an LPC for a referral of services, but there is a two and a half week wait to be seen by a psychiatrist to be evaluated for medication, which can be too long for many needing help. In that time, the person could easily have a crisis situation, possibly leading to incarceration or a need for inpatient services.

LifePath has 22 beds, 14 of which are for crisis cases that can stay up to ten days and eight are in locked wards where patients can stay 48 hours. There is a need for expansion so that more beds can be added, as patients are staying up to twenty-one days. These patients require full time RN’s and LPC’s to meet their medical needs. These patients have 250 encounters per month, including mandatory follow-up over the next 90 days, which takes a lot of resources from a mobile crisis team.

As far as substance abuse is concerned, Collin County’s Commissioner’s Court has failed our citizens entirely.

Per federal law, almost all substance abuse treatment must be handled by a non-profit provider. With LifePath, Dr. Gajraj handles the Methadone and Soboxsome treatments, while detox, rehab and residential treatments are provided by Grace to Change, Imagine, West Texas Rehab Center, Nexus, and Homeward Bound.**

It is estimated that 40% of Collin County Jail inmates have a mental health issue. There is a jail diversion program that is run by lawyer Elise Ferguson who serves as the Managed Mental Health Counsel. There is a team of nine, including two counselors and one psychiatrist. They provide hospitalization for prisoners with severe mental health or substance abuse issues, but they are overwhelmed due to the number of prisoners with these issues.

LifePath started when Collin County had 245,000 people, and now there are over one million people, with the amount suspected to rise to 3.5 million by 2050. Over time, there has been a lot of expansion, but we are at a critical point where more funding is needed to help LifePath expand again and supply the citizens of Collin County enough staff so that crises are diverted.