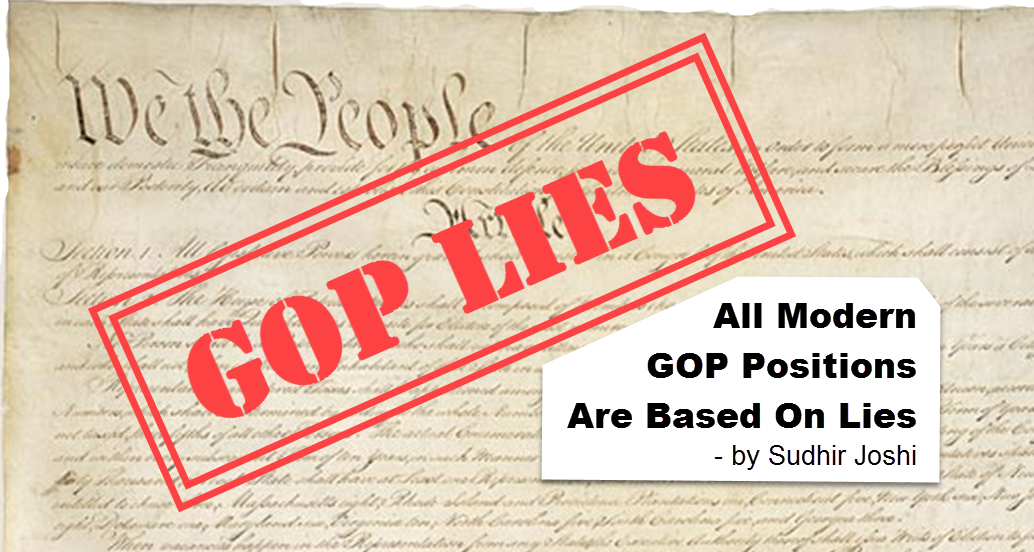 NOTE: This editorial is the second in a series. To read the first of the series on the GOP Healthcare Lies, click here.

There is a common lie that the GOP is the party of “fiscal responsibility” and “small government.”

In order to be “fiscally responsible,” a government needs to reduce its deficit and create a surplus. A surplus then pays down the debt. The only Presidents since 1960 to create a surplus have been Democrats. Johnson created a surplus in one of his four years. Clinton did three out of eight years.

In fact, deficits generally rise under GOP Presidents and decline under Democratic Presidents as shown in the Rachel Maddow blog: Despite Trump’s promises, deficit soars in 2019.

So, it is a statistical fact that Democrats are more fiscally responsible than Republicans.  Then why do people believe this lie despite the evidence? Part of the reason is that Democrats don’t do a good job of pointing out the facts. But there is more.

Let me illustrate by summarizing a conversation I’ve had hundreds of times in Collin County.

Me: “What does that mean exactly?”

Republican: “I believe that government should be fiscally responsible.”

Me: “Okay, that makes sense. What government programs would you cut?”

Republican: “We have to cut wasteful spending.”

Me: “I understand. But you’re a smart person. What specific programs would you cut?”

Republican: “Well there’s a lot of people in the city on welfare taking advantage of
the system.”

There you have it. There is a belief out there that millions of people are on welfare, not working when they could. Of course, if you probe further, most people believe that most welfare recipients are black.

An informative Huffington Post article: Americans Are Mistaken About Who Gets Welfare states, “The numbers reflect a significant overestimation of the number of black Americans benefiting from the largest programs. Medicaid had more than 70 million beneficiaries in 2016, of whom 43 percent were white, 18 percent black, and 30 percent Hispanic. Of 43 million food stamp recipients that year, 36.2 percent were white, 25.6 percent black, 17.2 percent Hispanic and 15.5 percent unknown.

Me: “I understand. But you’re a smart person. What specific programs would you cut?”

Republican: “I’m concerned about all these immigrants coming over the border and immediately getting social security.”

This is another lie spread by the right-wing smear machine.

As Fact-Check.org found in: Social Security for Illegal Immigrants?

“We’ll just quickly note that illegal immigrants are broadly disqualified from collecting benefits from government programs, according to U.S. Code, with only limited exceptions.”

These are the only circumstances under which illegal immigrants can lawfully receive government assistance. Notably absent from this list is any type of Social Security benefits.

To repeat: Illegal immigrants cannot legally receive Social Security benefits, and Congress isn’t about to vote on legislation that would change that.

Lies are used to cover up something worse. The truth is that the ‘fiscal responsibility’ lie is clever cover for those are uncomfortable with the changing demographics of our nation but don’t want to admit it. It’s a clever lie that their base can use to cover their racist attitudes toward blacks and immigrants.

Don’t believe me? Try this line of questioning with the next ‘small government conservative’ you run into. Post your results in the comments section.