September 17th, 46 years ago President Lyndon B. Johnson, from Texas, signed into law a bill authorizing this week in September to be recognized as National Hispanic Heritage Week.

During subsequent celebrations of Hispanic Heritage Week, Presidents issued public statements and hosted receptions while praising the contributions of Hispanic Americans to U.S. society. The Congressional Hispanic Caucus celebrated the week by citing examples of Hispanic-American contributions to the United States, drawing media attention to legislative interests for Hispanic Americans, and networking with grass roots and civil rights activists inside and outside the Hispanic-American community.

In 1987, Representative Esteban Torres of California submitted H.R. 3182, a bill to expand Hispanic Heritage Week into a Hispanic Heritage Month. In his remarks, Torres noted that supporters of the legislation “want the American people to learn of our heritage. We want the public to know that we share a legacy with the rest of the country, a legacy that includes artists, writers, Olympic champions, and leaders in business, government, cinema, and science.” The month-long celebration, according to Torres, “will allow our Nation to properly observe and coordinate events and activities to celebrate Hispanic culture and achievement.” Although Torres’s bill died in committee, Senator Paul Simon of Illinois submitted S. 2200, a similar bill that amended P.L. 90–468. The Senate bill passed Congress and President Ronald W. Reagan signed it into law on August 17, 1988.

Today, we join hands and celebrate an important date in history and on this day, it is only appropriate to take time out and remember that out of our diversity, comes many strengths. 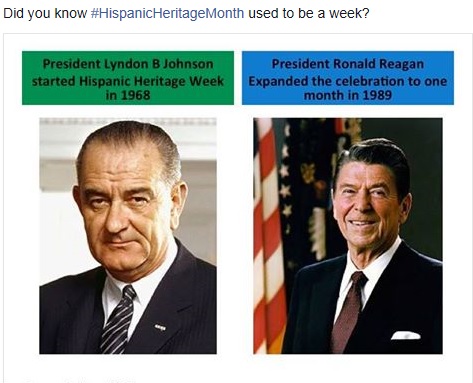