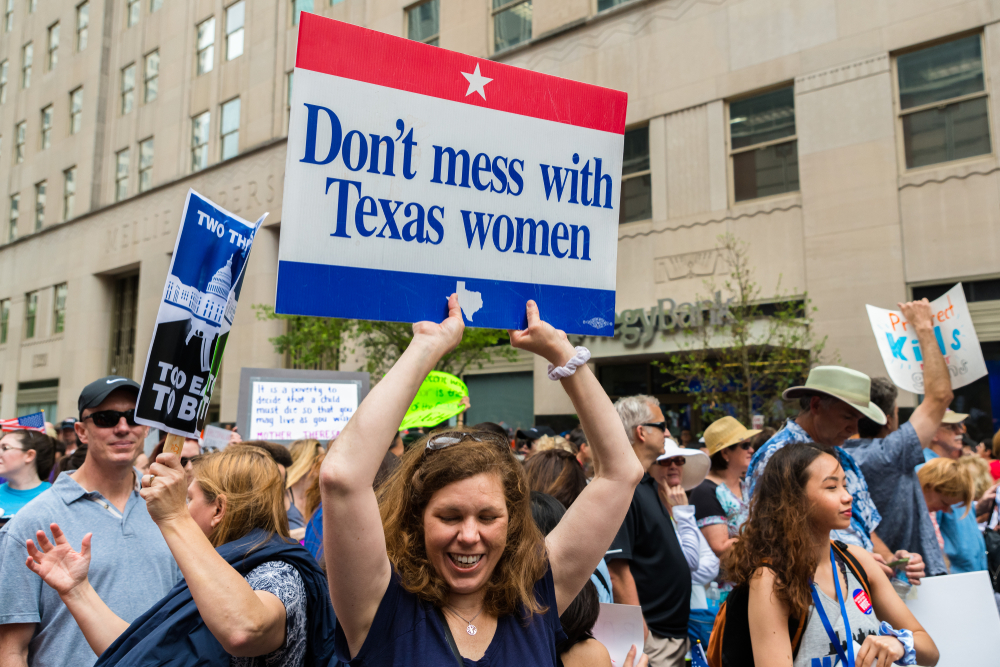 By Sarah Mitchell, President, Women Organizing Women Democrats.
In May, Governor Greg Abbott signed into law one of the nation’s strictest abortion measures, SB8, banning abortions as early as six weeks into a pregnancy with the law effective September 1, 2021. His Facebook Livestream said the Legislature “worked together on a bipartisan basis to pass a bill that I’m about to sign that ensures that the life of every unborn child who has a heartbeat will be saved from the ravages of abortion.” The bill bans abortions after what they call “a fetal heartbeat” has been detected. It gives no exceptions to cases where the woman was impregnated as a result of rape or incest.

The unique twist for SB8 is that “instead of having the government enforce the law, the bill instead turns the reins over to private citizens — who are newly empowered to sue abortion providers or anyone who helps someone get an abortion after a ‘fetal heartbeat’ has been detected.” Most alarmingly, “the person would not have to be connected to someone who had an abortion or to a provider to sue.”

I have been pregnant 6 times and have one living child. I’m not going to tell you that despite this I am pro-choice. I am telling you that BECAUSE of this, I am pro-choice. Even when a pregnancy is very much wanted, there are a million things that can go wrong, and in 1 out of 4 pregnancies – it DOES.

Yet instead of increasing access to healthcare, birth control, and childcare; instead of closing the backlog of rape kits, holding abusers accountable, and removing the gender and cultural bias in the medical field; instead of paying women what they are worth, so they don’t have to give up their careers to raise children; instead of ensuring child support is paid, our legislators insult us. They tell us we don’t know whether we’ll change our minds on removing the ability to have children, we don’t know our own bodies enough to understand that pregnancy whether wanted or not can endanger our physical, emotional, or mental health. They assume we don’t pay attention when they grant rapists shared custody, or when they don’t give jail time because the assaulter has a bright future, or “only made one mistake.”

If Republicans truly believed that the hope of a child growing in our uterus could feel pain, they wouldn’t force mothers who know there are heart defects, brain defects, organs growing outside the forming body, or any number of the myriad things that can go wrong in a pregnancy to carry full term – it’s cruel.

Neither the law nor these legislators care about the actual humans or science involved. Pregnancy tests often aren’t considered accurate until at least week 5 due to hormone levels. OBGYNs don’t schedule the first appointment until 8 weeks.

As for that heartbeat? A coma patient who has no brain activity still has a heartbeat. Does that make them still alive? Does that mean they can feel pain? A fetus that hasn’t developed kidneys or only developed half of a brain has a heartbeat. Does that make the pregnancy viable? Does that mean the mother should have to walk through nine months of mental and emotional torture? The answer, for hundreds of thousands of bereaved mothers, is a resounding “No.” I stand with the millions of women who know that access to abortion IS healthcare.

This law, SB8, passed in the regular legislative session in May and was signed in June. Now that it is September and the law is in effect, suddenly people are paying attention. Suddenly now they are trying to figure out what to do and how to help. We cannot remain reactive. To create change, we need to listen to women raising the alarm and follow their lead. There weren’t enough people listening in 2015 to us when we said right-wing voters were organizing to get out the vote to take control of the Supreme Court and overturn Roe v. Wade. There weren’t enough people listening to us when HD67 Rep. Jeff Leach tried to inflict the death penalty on physicians and women in 2019 or when he brought in “abortion survivors” to testify on a bill that was a solution for a nonexistent problem.

If we do not take this moment to band together, organize, and demand change then nothing will change. Every single one of you can look up the donors to every single legislator that voted to take away healthcare for women while simultaneously allowing anyone to carry a gun without training or a permit and let them know you will raise hell with them until they put enough pressure on the lawmakers they own to stop this bill. When we affect businesses, they affect the government.
How you can help:
Texas Equal Access Fund: provides financial & emotional support to people seeking abortion care in the north, east, and Panhandle regions.
Afiya Center: advocacy organization dedicated to transforming the lives of Black Women and Girls through Reproductive Justice.
Fund Texas Choice: serving pregnant people who are seeking abortion-related services and information.
Jane’s Due Process: helps young people in Texas navigate parental consent laws and confidentially access abortion and birth control.
Lilith Fund: supports the right of all Texans to make their own reproductive choices, regardless of income.
Attend the Dallas Repro March on October 2, 2021. Many Collin County clubs will send delegations if you don’t want to attend on your own.