As expected, the 2022 Republican Primary is a race to the bottom for right-wing extremism and bigotry. The latest wedge issue primary candidates are running up the flagpole is the issue of foreign students, namely Chinese students attending Texas universities. Shelly Luther, famous as a salon owner who valued her business over the lives of her staff and customers and now running on the Republican Primary for State House District 62, recently tweeted (since deleted) “Chinese students should be BANNED from attending all Texas universities,” Luther said in the Wednesday tweet. “No more Communists!” She followed that gem up with state's taxpayers "should not be subsidizing the next generation of CCP leaders,” referring to the Chinese Communist Party. Not to be outdone, another #GQP primary challenger, Mitchell Ryan, running for HD98, tweeted, “Let’s vote and see what “democracy” says about whether foreigners should take the places of Americans in American universities.” 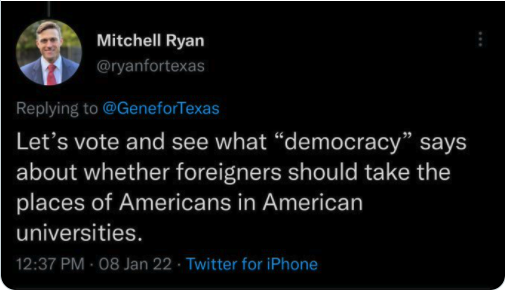 This is nothing more than racist, fear mongering extremists trying to push the whole idea of “outsiders are replacing you.” Here are some FACTS about foreign students attending Texas schools:

Foreign students actually help subsidize Texas students, who receive a significant discount for being Texas residents. Having foreign students is also a net-positive generally, bringing diversity of experience and views to our schools. As much as extremists like these two candidates would like to roll back the clock, the US and Texas are part of a global community and economic network. China in particular is a major trading partner for Texas; in 2018, China was Texas’ 3rd largest trading partner, with $16.6 billion in exports going to China. It absolutely makes business sense for Texas college students to get to know Chinese students.

Finally, Chinese-Americans, whether immigrants or children of immigrants, have made significant contributions to the US. In business, technology, the arts, entertainment, even in government, Chinese-Americans have proven how immigrants can and do contribute to our society. Here in Collin County, Chinese have a very large presence, with Asians generally the largest ethnic group after non-Hispanic whites, and Chinese being the second most common non-English language spoken, after Spanish.

This is the sort of fear-mongering that has resulted in attacks on Asian-Americans or people who appear to be Asian. In the wake of racist tropes tying the COVID-19 pandemic to Chinese people, violence against Asian-Americans inspired Congress to work with the Biden Administration to pass the COVID-19 Hate Crimes Act in May of 2021. This Act addresses hate crimes throughout the COVID-19 pandemic, but has particular emphasis on the increase in violence against Asian Americans. While it passed Congress with bipartisan support, it was sponsored by House and Senate Democrats.

In 2022, Texas voters have a choice. They can choose to align themselves with extremists whose narrow-minded bigotry will hurt Texans and our Texas economy, or they can choose Democratic governance through our candidates, who are committed to growing our economy, making opportunity for all Texans, and an end to policies that attack Texans based on who they are or where they are from. Elections should be voting for candidates who rise to the top, not the winners of the race to the bottom.