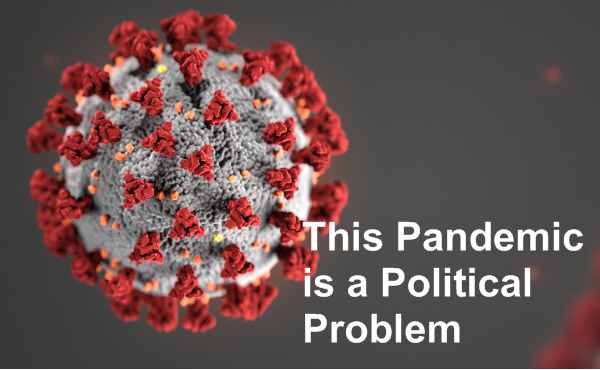 There’s no doubt that some people will read this title and be upset about this situation being politicized. But this is the same as complaining that it’s too soon to talk about common sense gun control after a mass shooting. If we don’t address this now we are just as culpable as those who encourage others to disregard social distancing and continue business as usual.

Let’s look at the facts.

Experts have predicted something like this pandemic and the failure to respond well for years. According to ForeignPolicy.com, by some counts there have been at least four different pandemic simulations conducted in the US this century, and none have turned out well. Their lessons have been mostly ignored by government leaders. The current administration’s budgets have cut funding for the CDC, and they eliminated the National Security Council’s pandemic-response office.

When COVID-19 first surfaced late last year, the federal government had warned of the threat of a pandemic but did nearly nothing to prepare. The administration had the opportunity to invoke the Defense Production Act to force the mass manufacture of ventilators and personal protective equipment. It didn’t, and even now it is still slow in invoking its provisions. In the midst of critical shortages, the federal government has refused to play a coordinating role and pitted states against each other as well as itself in efforts to acquire vital equipment and supplies. There have even been reports of federal agencies seizing shipments headed for states and hospitals.

Further, there was an insufficient emphasis placed on the development and mass production of testing kits. This made it impossible for us to use the successful containment strategies employed by South Korea and Germany.

A handful of Republican governors have refused to issue stay at home orders. In our own county, the Republican County Judge initially issued a directive that only essential businesses should stay open, but then went on to declare that every business is “essential”.

Our Lieutenant Governor advocated that senior citizens should be sacrificed for the sake of the economy. (Which is actually a false choice. Studies of the 1918 flu epidemic showed that cities where stricter measures were taken actually experienced faster economic recoveries.)

And the result of all of this is the prospect of thousands, if not tens of thousands, of premature deaths. We also face what is at least a short term economic catastrophe.

This public health crisis is a failure in the development and execution of public policy by the government. In far too many cases, from the White House down to the county courthouse, our governments have been practically criminally negligent in fulfilling one of their basic responsibilities – that of keeping their citizens safe.

Our health care system, including too much of the public health system, is focused on getting a maximum return on investment for shareholders, not keeping people healthy. In a system like this, there’s no room for the excess capacity needed to satisfy the peak demand of a pandemic.

Our politics have too long been driven by an anti-intellectual conservative mindset that distrusts science, or actively discounts it because paying attention to it would threaten profits.

And finally, our politics are dominated by a political party and ideology that hold that government is essentially evil, and refuse to use it for the public good.

One thing we cannot do is think that this pandemic is just a single occurrence. With the connectedness of our modern global society and the ecological disruptions of climate change and population growth, it probably won’t be another hundred years before the next major pandemic hits. And it may be even more easily transmissible and with a higher death rate. We need to be ready.

This is a political problem and it can only be fixed by a political solution. We need to elect leaders who believe in the ability of government to serve the public, who take seriously the trust the public places in them. We need public policy informed by science, and competent administrators to execute those policies. We must fire a President who called it a hoax and then the “Chinese” virus, before taking it seriously – and who apparently still only sees it through the lens of the effects on his re-election. We have to replace a US Senator who mocked the seriousness of the pandemic by tweeting a picture of a Corona beer. We need to retire a County Judge who seems more beholden to the radical Libertarian philosophy of the west Texas oil billionaires behind Empower Texas than he is to his own constituents.

What we do now will in the long run be just as important as the health care workers currently putting their lives on the line to fight this pandemic. Let us make our efforts worthy of their sacrifices.