A statement concerning identification requirements appears on the back of orange 2014-15 Voter Registration Cards. The statement reads: 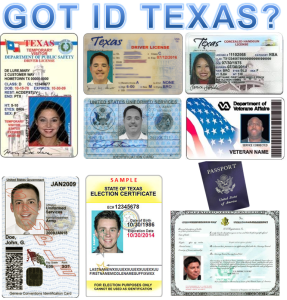 The above identification must be current and not expired, or if expired, then it must have expired no more than 60 days before it is presented for voter qualification at the polling place. Please contact the Secretary of State or your local voter registrar for information concerning when the above photo identification requirement for certain voters with disabilities, or voters with religious objections to being photographed, and voters affected by certain natural disasters.

To qualify to vote, their is no requirement for the Election Judge or Clerk to determine that the photo on the voter’s I.D. substantially resembles the voter, but the SB14 voter photo ID law does require that the name on the I.D. is substantially the same name listed in the poll book.

Voters who present a driver’s license, pass port, citizenship certificate or other required photo I.D. to an election clerk that has a different first, middle, and last name than appears on the poll list, will be required to complete an identity affidavit. A mismatch on just the middle name between the I.D. and poll list will definitely result in the voter being required to complete an affidavit attesting to their true identity. If the names vary between the I.D. and the poll list, the voter may be required to vote a provisional ballot. A newlywed woman who presents a driver’s license with a different middle and last name than is printed on the poll list may be require to vote a provisional ballot at the polling place and then travel to the county elections office one to six days after Election Day to present proof of her identity.

Only 66% of women have an I.D. that reflects their current name. Newlywed women often update their driver’s license with their new married name, but neglect to update the their voter registration and other documents. Many married women use their maiden name as their middle name on some documents, especially their driver’s license, and use their given middle name in other circumstances, like registering to vote, or vice-versa. Some married woman adopt a hyphenated last name that combines their maiden last name and husband last name, but not uniformly on all documents. Asian-American women who are naturalized citizens often adopt an Americanized name on many documents, like registering to vote, but that name isn’t the same as on their citizenship certificate.

Many women may notice something new on the orange 2014-2015 Texas Voter Registration Certificates (VRC) mailed during 2014. Voters’ former names were added to the 2014 voter registration cards because the Texas Election Code (sections 15.001 and 13.002 of the Texas Election Code) says they should be listed. Former names include maiden name, former married name(s), etc.) Many women are concerned the inclusion of former names on their VRC has something to do with the new voter photo I.D. law and that their name won’t match their photo id I.D. In fact, this this has nothing to do with the new voter I.D. law. (Texas Secretary of State Election Advisory No. 2013-08)

Check how your name appears in the white mailing address box in the lower right quadrant of your new orange 2014-15 voter registration card. This is the name that appears on the official voter roll – and that will be the name listed on polling place poll books.

The name that appears to the left side of the card – in the orange area above the X signature line – may have former names jumbled in with your current name. This jumble of names may or may NOT exactly match the name that appears on the official registered voter roll, but some combination of the current and former names printed on the new VRC’s probably will match the name listed in the poll book at the polling place.

The listed former names shouldn’t negatively affect your ability to vote, and it probably will not change the number of people required to complete the name affidavit form, because the name on their I.D. doesn’t match character for character the name listed in the poll book.