Your health care is at stake in the Texas U.S. Senate race — make sure to vote accordingly 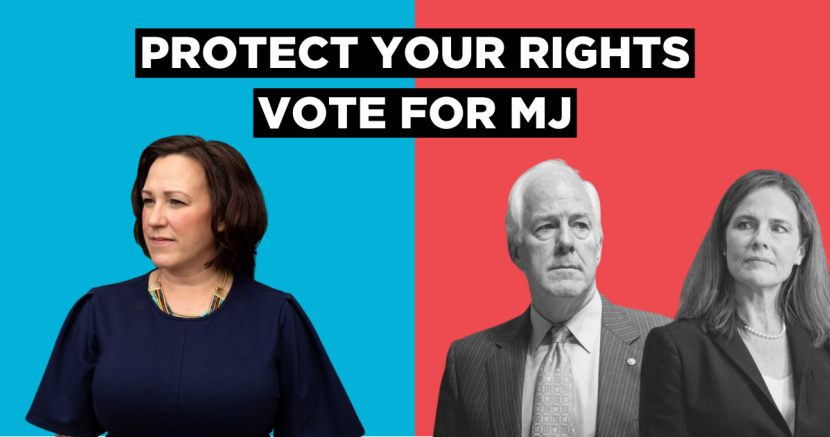 John Cornyn wants to end the Affordable Care Act, MJ Hegar is fighting like hell to save it.

It’s been 230 days since the beginning of the COVID-19 pandemic. Since then, thousands of Texans have lost their jobs and their health insurance, and the number of uninsured Texans has risen to 1 in 3. Many families in our state are one hospital bill away from bankruptcy, and the pandemic has exacerbated the health inequities that people of color in Texas face every day.

That’s why it’s no surprise that heath care is the number one issue Texans care about in this election. And we have one race in our state that could drastically improve health care availability for all Texans — the race between Senator John Cornyn and Democratic candidate MJ Hegar.

One look at Cornyn’s track record proves he has failed to protect Texans’ access to affordable health care, while Hegar  has the experience and values that show she is ready to fight like hell for our health care in D.C. If you care about health care, reproductive rights, or addressing health discrimination, MJ Hegar is your choice for the U.S. Senate.

Cornyn has failed Texans for 18 years.

Since he gained office in 2002, Cornyn has spent his tenure fighting for private insurance companies, not working Texans. He’s voted to repeal or defund the Affordable Care Act and its coverage for pre-existing conditions 20 times, which would leave 2 million Texans stranded without health insurance in the middle of a pandemic. He’s also opposed expanding Medicaid in Texas, leaving thousands of Texans needlessly uninsured each year. Cornyn has watered down bills for drug companies, opposed legislation to make prescriptions more affordable, and supported a health care plan that would have increased the number of uninsured Americans by 22 million.

If you want to find out why Cornyn refuses to expand health care access for Texas, just follow the money. In his nearly 20 years in the Senate, Cornyn has taken $1.7 million from the pharmaceutical and health care industries, earning him the title of heath care repeal’s “top salesman.” And just last week, a Buzzfeed News article revealed how Cornyn stopped supporting a bill to end surprise medical billing after receiving thousands of dollars in support from private equity firms.

MJ Hegar will expand health care for all Texans.

As a working mom and military veteran, MJ knows what it’s like to struggle with access to health care. While pregnant with one of her sons, MJ was facing being laid off from her job, worried that she couldn’t get health care because her pregnancy was considered a pre-existing condition. In addition, during her time in the military, she experienced TriCare, basically military Medicare, and describes it as “the best health care I’ve ever had.” MJ knows that not every Texan can afford the high price tags and coverage gaps that come with private plans, which is why she supports a public health care option for all Texans.

Contrary to Cornyn, MJ supports increasing health care access for Texans, from expanding the Affordable Care Act to ensuring access to reproductive health care. Her plan would ensure that all Texans who use the ACA would be able to keep their insurance, and she will advocate to expand Medicaid in Texas to close the coverage gap in our state. MJ is also ready to fight to end systemic racism in  health care, including health care discrimination and high maternal mortality rates, especially among Black Texans. Meanwhile, Cornyn refuses to even acknowledge that systemic racism exists at all.

We need a senator who supports pro-healthcare judges.

The confirmation of Amy Coney Barrett highlighted the need for a Senator that supports health care and reproductive rights for all Texans. Cornyn has supported Barrett’s nomination from the beginning, while Barrett has been critical of the Affordable Care Act in the past, calling it “SCOTUScare” and writing that Chief Justice John Roberts “pushed the Affordable Care Act beyond its plausible meaning to save the statute.” In just a few weeks, the Supreme Court will hear arguments on a case that could overturn the ACA in the middle of a pandemic, and Barret could cast the deciding vote. Cornyn has consistently supported anti-healthcare and anti-abortion judges up and down the judicial system, hurting Texans and lining his pockets in the process.

Health care is a human right. Period. We need a senator who will fight like hell to give Texans health insurance, not strip it away during a global pandemic. This isn’t a political issue, it’s a moral one, and MJ Hegar has the conviction and the backbone to stand up for our health care rights in D.C. and beyond.

The views expressed have not been endorsed by any candidate or campaign.