Medicare is not a government-run healthcare system like the Veterans Health Administration.

Medicare is a single-payer primary health insurance coverage like the French system, but restricted to age 62 and older. All care and drug providers are independent, unlike the Veterans healthcare system where the government pays salaries to care providers and owns the hospitals, like it does in Great Britain.

One has to wonder how many of our Republican senior friends refuse to join Medicare because they believe it is social medicine. On the other hand, we believe that many veterans seek alternatives to VA care, but more likely, because of its poor reputation. 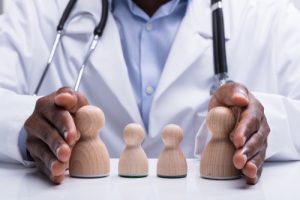 Medicare medical insurance payments are deducted from paychecks or from Social Security monthly bank transfers. The basic plan offers free choice of doctors and hospitals to all and pays for 80 percent of the costs.  To offer an additional option, it also subcontracts individual healthcare management to Health Maintenance Organizations (HMOs). They receive a flat fee from the Centers for Medicare & Medicaid Services (CMS). Each HMO contracts with doctors, hospitals and pharmacies. A Medicare Advantage Plan or Medicare Part C, as it is called, includes Prescription Drugs Part D. They somewhat limit our choice of providers, but there are no or very small monthly payments, unlike when adding ‘Supplement Insurance’ to basic Medicare coverage.

We believe MEDICARE FOR ALL is a valid solution for our country. We  understand that American exceptionalism puts us above the argument that we should have some form of universal healthcare because most countries in the world have it. Let’s say it anyway: Why not us?

In France, the single–payer system pays 70 percent of the costs of health care; and citizens can buy supplemental insurance, often sponsored by the employer, at a reasonable cost. Basically, the insurance is financed by the employer contributing 13 percent of the employee salary and the employee seven percent. All providers in France are reimbursed the same, based on the service rendered. Drugs, depending on their type, have different co-pays, but some are as much as 90 percent cheaper than here. Established in October 1945, the French national insurance agency (Securite Sociale) manages French healthcare money just like an HMO. Incidentally, this program also covers national retirement checks and healthcare including long-term care. Finally, the plan extends not only to working but also to non-working French citizens.

In a “Myths and Lies about Single-Payer…” pamphlet, it says that 120 Americans die every day from lack of healthcare. Shouldn’t we “Exceptional Us” do better?