Texas Republicans have gone all-in with partisan gerrymandering to both protect incumbents and preserve their mostly white minority rule in this round of redistricting. Their redrawing of districts in Collin County is particularly bad. 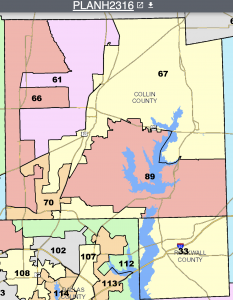 The Legislature’s first map (click the image for a larger view) for Texas House of Representative districts was made public only on September 30, and this map (PLANH2316) passed the full House on October 12. It’s a radical departure from the current districts and may still change a bit, but likely not much. There may be grounds for a Federal voting rights lawsuit.

The general legal requirements for redistricting are that districts must have equal or nearly equal populations and be drawn in a manner that doesn’t deny or abridge the right to vote based on race, color, or language group. Further, the districts for the Texas House of Representatives must as much as possible be contained within a single county or include the entirety of a county if the county is small. Those are the only legal requirements, and within those minimal constraints the Republican-controlled legislature, in blatantly partisan gerrymandering, drew maps that maximize their partisan advantage. The only decision for them was either to be greedy and grab as many districts as possible in the short term but risk losing them in the long term, or to draw lopsided districts through cracking and packing that surrender a few districts to Democrats but give Republicans a longer-term advantage in other districts. For Collin County, they chose the latter.

Key points about this map:

If House Republicans think that Collin County Democratic voters are going to stand by idly while they create "safe" districts for their terrible incumbents, they are mistaken. HD66 Rep. Matt Shaheen and HD67 Rep Jeff Leach, who have narrowly avoided defeat the last two cycles (Shaheen by less than 1% both years) have had their positions shored up by cracking blue precincts and extending their districts into more reliably red areas in northern Collin County, but Collin County Democrats have been working to flip the county for years – and we aren’t stopping now. We will both challenge them, and will make runs on these new districts, HD61 and the new HD70.

WHAT YOU CAN DO:

Finally, contact Senator Chuck Schumer and President Biden and ask them to work harder to pass the For the People Act out of the US Senate. It’s our best hope for ending this kind of partisan gerrymandering.