Have you noticed when there is a big event, every news channel covers the event in the same way?  This results in a common narrative emerging while opposing points of view are suppressed through lack of media attention.

Consider the fact that Spain, Thailand, Japan, and other countries still have royal families.  Do we ever hear about their marriages or babies in the US press? No.

The excessive coverage of the British royal family is an example of the herd mentality that the US media exhibits which I call a ‘media frenzy.’

Now, let’s go back to politics. 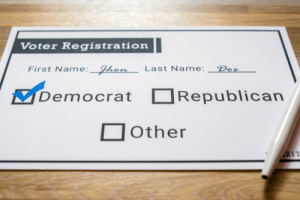 Let me give you a more dangerous example of media frenzy.  The Iraq War.  Many of you may remember how the Bush administration’s claims that Iraq had weapons of mass destruction was covered non-stop. At the same time, opposing viewpoints were rarely covered.   The Bush administration was able to use the surge in patriotism after the 9/11 attack and the resulting media frenzy to convince the Congress that attacking a country that had nothing do with 9/11 was the right thing to do.   This media frenzy was partly responsible for the loss of hundreds of thousands of lives and a trillion taxpayer dollars.

So, what is the media frenzy today?

Let’s look at some facts that the media is ignoring or under-reporting.

Hillary Clinton won the 2016 election by three million votes.  Despite Comey’s statement, despite Russian interference, despite not visiting Wisconsin often enough, despite all the criticism of her campaign, she won. Period.

Trump won fewer votes, as a percentage, than Mitt Romney. Romney won 47.2% of the vote. Trump won 46.1% — a full percentage point less. But the media’s relentless coverage of the Trump base makes it seem like he won by a landslide.

The reality is that Trump is president because he drew the electoral equivalent of a royal flush in stud poker.  The media is under-reporting how lucky Trump was.  Could it happen again? Sure.  But is it statistically probable? Not likely. And certainly not if we get to work and get out the vote.

Here’s another fact. There is no better indication of behavior than how people vote with their wallets.  So many people were shocked by the Trump’s electoral victory that Jill Stein was able to raise $7.3M in a few weeks to pay for a recount.

That same voter shock and continued abhorrent behavior by President Trump resulted in 48.7% voter turnout in the 2018 midterms.  This was the highest midterm turnout since 1913! This resulted in Democrats gaining a net of 40 seats in the House and 5 governors in mid-western ‘Trump’ states.

So, what do all these stats say about 2020 that the media is not reporting?

Well, before I get to that, let me digress.

I am friends with a couple who would have voted for Hillary in 2018 but neither one bothered to vote.  I asked them why. They answered that the media had them convinced that Hillary was going to win and Texas would go red. Of course, the media was only half right.

That’s the kind of media narrative we must overcome in 2020.

We must inform the voters that Texas can go blue in 2020 and it’s up to us to make it happen. Consider these facts.   Hillary lost Texas by 9% in 2016. But just two years later, Beto lost Texas by only 2.5%. With another two years of demographic shift in Democrats favor, Texas will be the biggest battleground state 2020.

The media frenzy wants to magnify every little quirk of the 23 Democratic candidate and then ask, ‘can this person beat Trump’ with this flaw.  They want us Democrats to start fighting among ourselves about these flaws resulting in some people voting 3rd party or some people staying home.

The debates and primaries will take care of themselves. A winner will emerge. We must convince our base that Texas can go blue; that their vote matters, and to VOTE BLUE NO MATTER WHO!