– Freedom of Religion, Speech, and the Press

Congress shall make no law respecting an establishment of religion or prohibiting the free exercise thereof, or abridging the freedom of speech or of the press, or the right of the people peaceably to assemble and to petition the government for a redress of grievances.

– The Right to Bear Arms

A well-regulated Militia being necessary to the security of a Free State, the right of the people to keep and bear Arms shall not be infringed.

Let’s look at the two Amendments. 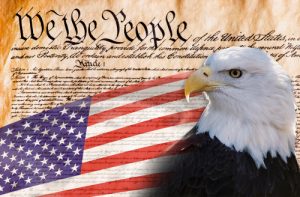 We repeatedly hear about the second amendment. It gives room for diverging interpretations which are used to prevent common sense laws to be enacted about guns.

However, the first amendment rarely makes the news; it is sometimes quoted when claiming freedom of the press. I believe this is the amendment the most violated by the folks representing the Right.

With your permission, let’s look at the first three directives, even though the fourth has had occasional police enforcement issues.

“No law respecting an establishment of religion.” The Pledge of Allegiance was written in August 1892 by the socialist minister Francis Bellamy. In 1954, President Eisenhower, afraid of the Communist threat, initiated adding the words “under God.” Bellamy’s daughter objected to the addition and so do the non-religious among us.

“…or prohibiting the free exercise thereof (religion).” In our own county, it took the threat of a lawsuit to allow members of the Muslim community to secure land for a cemetery.  Anti-Semitism is a flagrant violation of the first amendment.  Non-Christian religious individuals are often harassed in public places. It is both intentionally and unconsciously validated in the press, on television and the internet by an influential conservative faction. It is part of our responsibility as Democrats to elect folks who reject all forms of discrimination.

Semites are not only those of Jewish faith:

Definition of Semite by Merriam-Webster: ‘1a: A member of any of a number of peoples of ancient southwestern Asia including the Akkadians, Phoenicians, Hebrews and Arabs. 1b: a descendant of these peoples.’

As the definition states, Arabs and Hebrews are Semites. Jesus was a Semite. The followers of the three Abrahamic faiths are told that they are the descendants of Shem. He was one of the sons of Noah as reported in the Hebrew Bible as well as in the Arabic Koran. ‘The children of Shem were Elam, Ashur, Arphaxad, Lud and Aram, in addition to daughters. Abraham, the patriarch of the Hebrews and the Arabs, was one of the descendants of Arphaxad.’

“…or abridging the freedom of speech or of the press.” This is the part for which this amendment is most mentioned. What would the framers of our Constitution do with the recently coined “Fake News?”

Don’t forget to vote.  The choices you make of local leaders have direct impact on your daily lives.